Baker Gurvitz Army’s On the Road Again (Live) is being reissued this month “in celebration of Ginger Baker’s 80th birthday” !

The band was formed by the Gurvitz brothers Adrian and Paul and the illustrious Ginger (Cream) Baker, with some aggressive and confrontational undertones in the band right from the beginning. Stephen Parson a.k.a. Snips fronted the vocals, joining straight from so-called supergroup Sharks, where he played with Andy Fraser and Chris Spedding.

They played hard rock, tinged with Ginger’s jazz tones, and influences he had brought back from his recent stay in Africa, while Adrian Gurvitz’s claim to fame is being named 9th best guitarist in the world by Melody Maker ! Often the sound is dominated by the virtuoso drummer, but hey that’s not a bad thing. And on this CD there is also more of a jazz funk vibe which is done pretty well.

This album finds them at their 1975 peak, and in their best environment – playing live.

In the live set up, Ginger Baker’s drumkit was placed stage centre, and impossibly near the front of the stage. The surprise was that his drumkit was tiny – the drums small, his ego and ability huge. And boy did he pummel that kit !

The venue for this recording is the New Victoria Theatre in London. The band are hot, and the music transcends the decades remarkably well. The riff based rock songs probably work best – as in the opener “Inside of Me” and “Freedom”. The bluesy “Remember” also shows up well.

Not to forget the obligatory 70’s drum solo, from perhaps the king of that genre.

A Hendrix sounding “Sunshine of your Love” brings proceedings to a close.

Worth a listen for anyone who is curious. Ginger Baker’s between song announcements are worth the admission money alone! 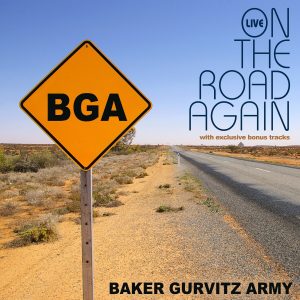