The world is a pretty harsh place at the moment with meritocracy, climate change, and the pull of autocracy all creating an uncertain future and, in a case of art imitating life, Ireland’s Bailer condenses it all into a brutally heavy sound. Since 2015 they’ve left a tantalising trail of singles and EP’s which finally leads to their debut album Disposable Youth. To call it explosive would be an understatement but it’s certainly an incendiary effort that should propel the band to the highest echelons of heavy music.

Self-described purveyors of “Grim Hardcore” Bailer aren’t a band who deal in subtleties and opening track ‘Blackout’ arrives like a huge wrecking ball and immediately makes its presence known. There’s a definite ‘90s influence (think Converge and Born Against) yet it’s melded to a modern metal sensibility and the resulting sound is one that defies easy categorisation. Using tonality to great effect ‘Blackout’ delivers a series of electric shocks and segues straight into the musical bulldozer that is ‘Bastard Son’. Cramming more into 100 seconds than most bands put on an entire album it’s all very mosh pit inducing and is sure to cause mayhem wherever it’s unleashed.

Recorded at The Ranch Production House (Southampton) and produced by Lewis Johns Disposable Youth is an album that sounds absolutely massive. Towering over the listener as if a huge monolithic structure ‘Out Of Frame’ takes heaviness to a whole new level and the low end rumble is guaranteed to loosen fillings. However, despite their visceral nature this Irish quartet never lose sight of important stuff like song structure and subsequently each of the 10 tracks that comprise this album swing with an inherent groove. Having played shows with heavyweights such as Sick Of It All, Malevolence and Palm Reader has certainly rubbed off on Bailer and there’s a definite organic, live feel to this album and especially in Chris Harte’s guitar work. Alternating between crushing riffs and tonal manipulation his unique sound is a big part of the band’s modus operandi.

The weighty lyrical content of tracks such as ‘Strung Out’ and ‘Gateway Drug’ are in total sync with the music and the two combine to create a feeling of despair and ostracization. That’s only enhanced by drummer Sean Conway and bassist David Cleere who conspire to create a pounding rhythm section that turns ‘Cruel Master’ into a rockfall while Alex O’Leary’s throat-shredding vocals only add to the feeling of alienation. At a mere 30 minutes Disposable Youth is a fairly short album but it benefits from its brevity; not a single second is wasted, and each song is the most direct line to what it’s all about and, by the time we reach closer ‘Fester,’ we’re left feeling somewhat emotionally drained.

In Disposable Youth Bailer have produced the perfect soundtrack for these brutal times. 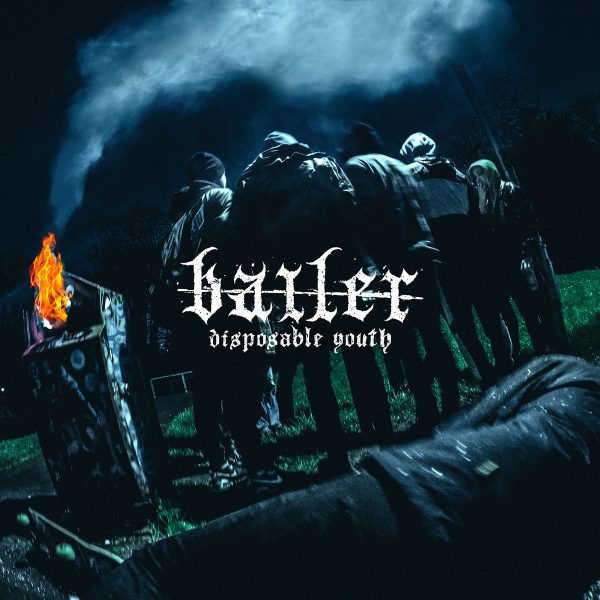