Norfolk 5-piece Bad Touch have returned, and not a moment too soon. ‘Kiss The Sky’, their new album, is just what the doctor ordered in these downbeat times. It’s a salve, a balm, a much needed dose of amp-cranking, head-bangin’, booty-shakin’ good-time rock ‘n roll. No more, no less. Bad Touch are back, and they’re here to make us feel good, to make us kick out all of our fears and anger for an hour or so and dance all over them.

So, this is studio album number four, following relatively hot on the heels on 2018’s ‘Shake A Leg’, and their second album with Marshall Records…and yes, it is that Marshall. And, as good as ‘Shake A Leg’ was, and is, this is on another level. This could break them, big.

Confidence is here in spades, and there’s no time lost in letting us know. Opening track ‘Come A Little Closer’ bursts from the starting gates, all big hair, flowing shirts and bluesy slide guitar. It’s a declaration of intent and a very definite nod to The Black Crowes. There are a lot of subtle influences at play here but the Crowes are the big one. The swing, the shimmy, the groove is all over this album. The ever present gospel style backing vocals throughout are a constant bow to ‘The Southern Harmony And Musical Companion’.

So, yes, there are influences…Free are in there too, as are The Stones, Zep, and any number of classic rock bands, but this is no retro rip off album. Bad Touch are more than that, much more. The phrase retro does them a grave disservice, they’re not retro, they’re simply a great band, playing rock music. They love it, it’s in their blood, and with ‘Kiss The Sky’, they’ve proved that they absolutely belong in such exalted company, as peers. Yep, they’re that good.

So what else do we get? Lot’s more of the same for starters. Song after song of groove-laden, guitar-soaked rock ‘n roll goodness. There are skilfully deployed piano and keys, there are loose jams that kick back into killer riffs, there are raw, soaring, soulful vocals, courtesy of front man Stevie Westwood (who is really coming into his own). There’s a lot of Southern influence and a shit load of funk – cool, greasy, twin guitar funk, but funk just the same, just listen to ‘Strut’ – it does exactly what it says on the tin, chock full of sass, character and a solo Marc Ford would dig.

There are a couple of slow songs, you can’t party this hard without the odd breather. ‘See You Again’ in particular, is brilliant, showcasing the bands more reflective side with an increasing maturity. Acoustic guitar and carefully placed strings calling to mind prime, sentimental Rod and The Faces. Bonus track ‘Something About Your Kiss’ is worth mentioning too. It’s a gently epic tip of the hat to Fleetwood Mac, ethereal, floaty, you can almost hear Stevie Nicks in the background. It’s a brave step outside of their comfort zone and it pays dividends. If these tracks are anything to go by album numero five will be very interesting indeed.

But for now rock ‘n roll is just about enough and it’s a seam Bad Touch can mine effortlessly. The riffs continue to be huge and gritty, the choruses lodge instantly in your cerebral cortex and the amps continue to tremble under the joyful onslaught. There’s even a (no, you’re not misreading this) Kiki Dee cover. ‘I’ve Got The Music In Me’ is a brave, unexpected and totally triumphant choice of song. They’ve turned the song inside out, beefed it up, added horns and created a timeless, celebratory stomper. It’s right up there with Gun’s version of ‘Word Up’.

It’s an album that leaves you drained, grinning from ear to ringing ear and ready to press play and start air guitar-ing all over again. If you’re looking for a no nonsense top drawer classic rock album, then look no further. This may well be your album of the year.

Released on 19 June 2020 by Marshall Records 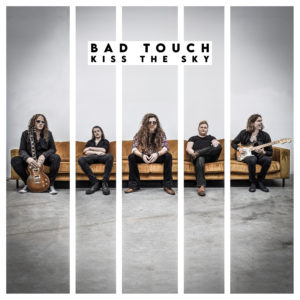