Self released on 3 August 2018 and reviewed by Gary Cordwell

Backwoods Payback. The name suggests wardrobes consisting of oily baseball caps and check shirts (along with lots of facial hair). Well, that’s pretty much what you get (apart from bassist Jessica Baker – cos she’s like, a girl, so, y’know, no facial hair). The stoner trio are fleshed out by vocalist/guitarist Mike Cummings and Alabama Thunderpussy drummer Erik Larson and this, believe it or not, is album  numero five.

Let’s keep this short and sweet because that’s kinda what we get here – 3 minute lumps of fuzzed up stoner/doom/punk goodness. ‘Pirate Smile’ launches you straight into an almighty barrage, Cummings warns of “a whole generation fucked” while the song hits a nice mid-section groove before building up to a big finish.

There’s a nice healthy mix here between aggressive and slightly more lethargic, it all ebbs and flows. There’s also an interesting variety of styles lurking amongst the distortion and malaise. The slower songs lumber along in a vaguely pissed off way while the faster ones lumber along at a speed-walking pace. ‘Generals’ has a bit of a 90’s NY hardcore vibe while the ghost of grunge rears it’s ugly head on several occasions – ‘Whatever’ definitely has an apathetic, strung out Seattle feel and collapses into a lovely morass of distortion while ‘It Ain’t Right’ is haunted by Layne Staley.

‘Cinderella’ brings a dirge to the party, steadily coming to life as fuzzy flesh is put on its bones. The album becomes increasingly metallic, as ‘Threes’ is fired up by a bulldozer riff and thunderous kick-drumming. ‘Alone’ becomes doomier still, and, while not really going anywhere, is a relentless chugalong with a nice stop/start moment. ‘Lucky’ has a fine Sabbath riff which lurches into an even more Sabbathy fast bit. It eventually fades out, suggesting a studio jam that went well.

There’s nothing wrong with this album, it ticks all the boxes – loud, fuzzy, shouty, but…it just lacks a certain something. A touch of fire, a bit of variety of pace. Songs don’t really go anywhere and mid pace is king here, there is a definite sense of (I’ve said it before and I’ll say it again) lethargy. Although it’s a short album it quickly becomes a tad repetitive. That said it’s heavy, scruffy and well played stoner fare. 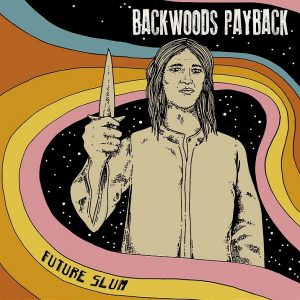