Putting a strong visual presence back into punk rock are tonight’s openers Creeper. Hailing from Hampshire they’ve hardly put a foot wrong in their five year career having released a string of critically acclaimed EP’s and a stunning debut album. The future promises to be just as bright as they kick off with latest single ‘Born Cold’ (from forthcoming album Sex, Death and the Infinite Void). Lots of tags have been thrown at the band ranging from post-hardcore to gothic punk yet, while they could fit in in either genre, their sound is greater in scope whilst also drawing upon the theatricality of David Bowie. The crowd pleasing ‘Suzanne’ finds vocalist Will Gould twirling the microphone like Suede’s Brett Anderson and its lyrics (“Let’s die holding hands”) could have come straight from The Smiths’ ‘There is a Light that Never Goes Out’. Set closer ‘Hiding With Boys’ is greeted with rapturous applause and ensures they bow out on a high.

As an old school rocker, I must admit it took me a while to get my head around the whole kawaii metal movement. The highly choreographed and staged show coupled with the manufactured nature of the bands just reeked of inauthenticity. But then again metal was always anti-authoritarian and doing exactly the opposite of what’s expected, and aren’t Kiss and Alice Cooper shows equally managed? Needless to say my opinion has softened and looking around tonight at the wide demographic Babymetal have drawn it seems I’m not alone. A palpable and tangible tension builds as we await the band which is further intensified by the caps rage intro that is ‘FUTURE METAL’. Like the Hoover dam bursting Babymetal arrive amid a riotous explosion of sound and colour and launch into the earworm ‘DA DA DANCE’ which is closely followed by the equally addictive ‘Gimme Chocolate!!’ 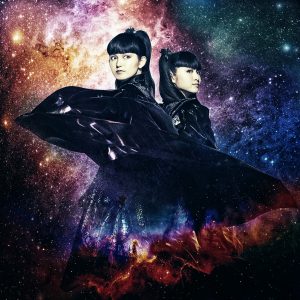 As you’d expect from a jaunt titled the Metal Galaxy World Tour there’s a strong space theme to tonight’s show most notably in the musicians who, adorned in masks, look suspiciously like the Cantina Band in Star Wars. It’s a high energy show with not a moment wasted as ‘Shanti Shanti Shanti’ and ‘BxMxCx’ are delivered with rapidity with plenty of devil horns and Kitsune signs held aloft. Joakim Brodén (from Sabaton) makes an appearance on the huge screen to add his vocal talents to ‘Oh! Majina’ which sees Babymetal indulge in some neo-folk dancing. ‘PA PA YA!!’ explodes with joy and causes all sorts of mayhem in the crowd and the good natured moshing (‘mosh’sh’ in Babymetal speak) during ‘Distortion’ finds a few casualties leaving the pit. I never thought I’d see a wall of death at a Babymetal concert but two sides do indeed line up during the martial ‘Karate’. As effervescent and excitable as the impossible spelling suggests ‘Headbangeeeerrrr!!!!!’ is a celebration of metal and takes us up to the well deserved encore ‘Road to Resistance’ as Babymetal disappear as they arrived: into a kaleidoscope of light.