In their youth, Atomic Opera mainman Frank Hart and Dug Pinnick of Kings X attended the same church. No wonder then that the dark, churning soundscapes created by their respective bands had the same questioning, confrontational intensity.

Combining elements of the Beatles, Queen, T Ride and other bands whose songs featured neatly arranged and orchestrated vocal choruses, AO forged their own white hot sound in the fires of progrock and heavy metal. For Madmen Only (1994) is a sensory assault, pummelling us with sledgehammer riffs, cushioned by heavenly, steel spined harmonies and proto hip-hop vocalising.

Producer extraordinaire, Sam Taylor’s precise arrangements and sonic layering helped create the fabulously sinister ‘Joyride’ and ‘Justice’. These are a microcosmic opening duo that double handedly lifted Christian Rock/metal out of the cultural ghetto it had retreated into.

‘Achilles Heel’, and ‘I Know Better’ are another two tough as teak, menacing rock songs that stalk you first before taking root in your psyche.

Even as the rock music of the Pacific Northwest became dominant, For Madmen Only sold well and recvd considerable critical acclaim.

The remastering brings up the dynamics interred in producer Sam Taylor’s original mix, making For Madmen Only sound better today than many current releases. Impressive. 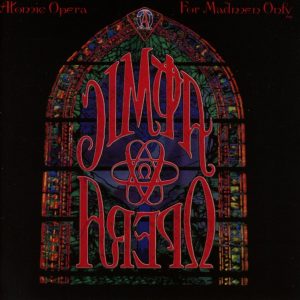