The Life Of Spice is an ambitious neo-prog album from Finnish band, Atom Works. The concept (there’s always a concept) takes us on a family’s train journey from Bombay through 1930’s colonial India, destination Peshawar, and the father’s funeral. At this point they are unaware he has bequeathed them a supernatural power, and the story unfolds track by track.

The densely constructed instrumental opener provides us with all the flavours of prog we will encounter throughout the album . . . Gilmour-esque soloing, vigorous keyboard/piano interplay, and chorale work combined with punchy riffs. It’s pacy, but never never falls foul of an unsustainable rate of bpms.

Comparisons are unavoidable. The breathlessly dramatic storytelling gives off a strong sense of Marillion and Genesis in ‘The Life Of Spice’, the track, and ‘The Brothers Thirst’. They balance intensity of performance with clipped percussion and dreamy keyboard textures very successfully. Essentially, these 2 tracks launch the album. But it never really reaches escape velocity.

One of the prime reasons for Progrock’s popularity is the music’s illusion of improvisation. You’re not quite sure what’s coming next, it could be a lightning strike of brilliance, it could be a damp squib. Too often here, it’s the latter, with the gritty lyrical tension of the attractively angular ‘Puppet Of The Three’, and the jagged guitar glissandos of ‘Perennial’s Prince’ undone by long, tuneless passages of overly wordy lyricism.

Later tracks just about rise above the fray. ‘The High And The Dry’ and ‘Time In My Eyes’ both grasp for a frisson of authenticity by dipping into King Crimson’s much muddied but vitally inventive waters. Each track is busy and bristling with energy, aiming for an anguished complexity that’s hard to pull off without sounding overly pretentious. They get there… just about.

There’s absolutely nothing wrong with being ambitious, and there are some inspired moments here, but too often Atom Works’ reach exceeds their grasp. 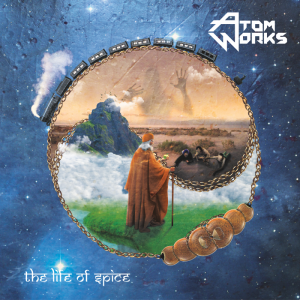