California without the fakes

Get your desert boots on and check out Californian trio Atala. If you’re too busy, fear not, Paul Castles has done the homework for you in this Q&A with Atala’s singer and guitarist Kyle Stratton. All you need to do is sit back, watch the vid, read the chit-chat and push the levels up on your speakers and prepare for a desert storm.

MR: Your new album Shaman’s Path of the Serpent is out on May 20 – How excited are you about it?
KS: We’re very stoked to finally release this album. We’ve worked very hard on these songs and we are nothing short of excited to be able to share this with everyone. We are very proud of what we created and hopefully others enjoy it as well.

MR: It’s got a real earthy quality to it, in a good way. Does it differ much from your debut?
KS: In a sense, our tones are very defined in this album. Our last album was amazing, although there was very strong emphasis on the vocals. On this album, Shaman’s Path of the Serpent, we co-wrote all the music together and really took our time developing our tone for a heavier direction. This album was us really finding ourselves as a band together and I fell this album reflects that.

MR: Did the songs come together quickly or had you been working on the material for a while?
KS: Our writing of the material is a little bit of both. It’s a mixture of letting the material set in, then we build on parts up in our fashion. We basically write the riffs, then build the jams and tone of the songs. After the atmosphere of the track is set, the rough vocals are laid. Then we will talk about the track together and make any changes we agree on. It takes time because we all kind work on it together when we have time. It’s a real team effort. 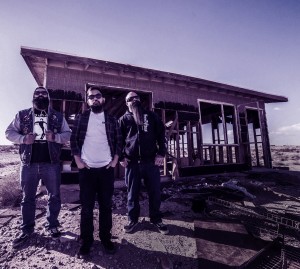 MR: Does the name Atala mean anything in particular?
KS: The name of Atala is inspired by a French novel about a man who leaves dominant society to live among the so called “savages,” or the indigenous people. He falls in love with an indigenous woman and has a child. We use this name because we three are all part indigenous and have been assimilated into dominate society. We find we were taught a culture or lack of culture and we long for the truth behind our indigenous culture and a connection back to nature.

MR: Atala have elements of doom but also a strong stoner kick, is that fair?
KS: That’s what everyone seems to classify us as. We are strongly influenced by those genres, although we are always delving into different styles. Atala is not the same. We feel labels on art are for the purpose of the listeners. We ourselves are only making art with no genre.

MR: Billy Anderson was involved in the studio. What did he bring to the recording process?
KS: Billy brought not only the ability to essentially replicate our tone, sound, and feel, but also able to interject a little of himself into the production of our album. In fact, there are even melodies of the vocals that he added. The man is a genius, constantly brainstorming ideas of his own to compliment our material. He’s a genius, simply put.

MR: You’ve had some rewarding reviews so far, you must be pleased about that?
KS: It’s very humbling to see everyone’s kind words. You could say we’re a bit shy. We’re excited to be releasing this album, on top of the gut aches we get from the anxiety of it. Having your art being viewed for the purpose of criticising it is somewhat stressful. So it is nice to hear positive feedback.

MR: The three of you have all played in other bands, so how did you come together to form Atala?
KS: John was introduced to the band during the recording of our first album, after our previous bass player couldn’t hold it together. John and Kyle have been playing music for quite some time. Jeff was introduced to Kyle by his brother, who is an artist at the tattoo shop, while Jeff and John had jammed about seven years before.

How influential is the California landscape on your sound?
KS: You know, it really depends. All in all, it’s pretty glamorized for what it’s worth. California is, in reality, filled with tons of really fake people. We don’t claim California, but instead the desert. We enjoy the vastness and separation from the city life and all the pseudo personalities it harbours.

MR: Are any of you still connected with any other ongoing groups/projects?
KS: Atala is where our focus is.

MR: Did I see you’ve just made a video?
KS: Yes you did. We recorded the ‘Gravity’ video towards the end of December. We’re very pleased with how it all came together. Everyone who was a part of the video and contributed was rad. The imagery was meant to evoke fear in those who believe in fairy tales and fables. The Pagan imagery was complimentary to the lyrical content. All in all, we are very pleased with the video.

MR: Looks like you’re going to busy on the road soon in the States?
KS: We will be pretty busy this summer. It’s very exciting for all of us, especially going to places we either haven’t been or haven’t been to in a very long time. The highlight of the tour is playing the Maryland Doom festival in June. We are beyond stoked to be playing the same day as The Obsessed. Last year I paid to see The Obsessed and this year I’m playing with them, it is very exciting. 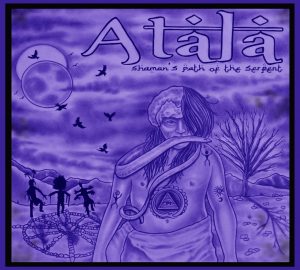 MR: Any chance of you guys getting over to Europe?
KS: Our eyes are definitely set on making it to Europe, but no plans are in the works as of yet. Hopefully it’ll all come together and we can get over there.