Paul Castles turns the heating up before unleashing the cold cries of Astral Winter, whose new album Forest of Silence was released by Immortal Frost Productions on 28 November, 2016.

When you think of Australia thoughts inevitably stray to sun-baked sandy beaches. This clearly though does not apply to antipodean artist Josh Young, whose own inspired musical journey is anything but warm, as indeed the very of name of Astral Winter suggests.

Josh envisioned Astral Winter very much as his own solo project when he began creating music in 2008. A year on and Phil Hemsworth had joined as lead vocalist allowing Josh to pour all his energy into the actual soundtrack and composition. A demo was soon forthcoming, Illustrations of Death, and work then began on an album. But just as Astral Winter appeared to be gathering a steady momentum Hemsworth left, leaving Josh to release Winter Enthroned as his own project after all. The album was issued via Immortal Frost Productions, with all 300 copies selling out.

This is the third full length release from Astral Winter, although second album Perdition, while not without merit, was something of a musical diversion and not strictly within the black metal confines which Astral Winter now occupy.

Forest of Silence has been a labour of love for Josh over the past few years and his ability to marry cold and forceful blasts with a majestic melodic blend makes for captivating listening. The opening track superbly illustrates what Astral Winter are all about. Cold. Chilling. Frostbitten. But with a massive symphonic heart that breathes life into their frozen anthems. With a fierce wind blowing through its epicenter, ‘Pathway to the Ancient Forest’ does not need vocals to add a sense of drama, the intensifying rhythm and rasping dynamics proving more than up to the task on their own. Eventually the cold barks do arrive merely adding another layer across the unforgiving landscape.

The captivating 10-minute opening blast is followed by ‘When Moonlight Evokes the Frozen Nights’ which sees the sinewy blackened cries of Josh supplemented by the lusty deep bellows of guest vocalist Daniel Klyne of Appalachian Winter. The tone and ambiance of each track is almost spelt out in its title and that’s certainly the case with ‘As I Embrace the Winter Winds’. The mood darkens on ‘Defenders of the Astral Kingdom (Part II)’ which is a more savage arrangement, relentless in its aggression with an inferno like blaze maintained from start to finish.

For a few moments at the very start of the next track a softer texture starts to unwrap but this is little more than a decoy as the sonic stampede quickly gathers pace again on ‘The Summoning of Arcane Magic’. Once more energy levels are pushed dangerously high although one introspective section does at least provide some respite from the raging storm.

The album does close with a fiercer finale, ‘The Palace of the Prophets’ opening with blazing fires caught up in a grand symphonic swirl. As though summoning all the energies of all that has gone before into one final furious icy blast, this epic 12-minute closer sees Josh at his most animalistic aurally, right down to wolf-like howls in the bitter closing stages. Blending keyboards with guitars alongside blastbeats sharp enough to take an eye out, this is not so much a final song as journey’s end. As journeys go, Forest of Silence is more memorable than most. 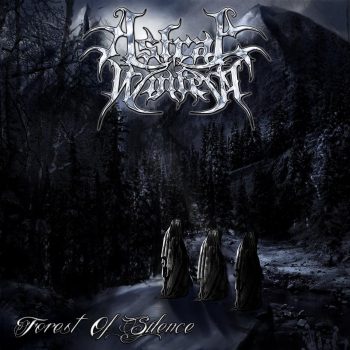