Formed in the summer of 1993 when Britpop was at its height London’s Asian Dub Foundation sat uneasily in an age when Oasis and Blur dominated the charts. With their fusion of rapcore, dancehall, ragga and South Asian beats Asian Dub Foundation came to shake up the music industry and shake it up they did. Europe was the first to latch onto their infectious grooves and by the time they released their fourth album Enemy Of The Enemy (in 2003) the rest of the world finally caught on too. Now reissued, and with a selection of bonus cuts, Enemy Of The Enemy has never sounded better and is the perfect opportunity to reconnect with this buried gem.

Heaviness comes in many forms and Asian Dub Foundation tap into the same kind of aggression as Fat Of The Land-era Prodigy and they don’t come more angry than opening shot ‘Fortress Europe’. Eardrum bursting drumbeats are punctuated by explosive guitar riffs as synthesisers spark from speaker to speaker like an electrocuted snake. Over this musical maelstrom a succession of voices delivers biting lyrics in hardcore rap and smooth reggae style while an angelic female singer weaves the whole song together. It all adds up to an impressive introduction and those unfamiliar with Asian Dub Foundation’s form of sonic attack should start here; but take heed…bring some body armour. Not since the collage that introduced Public Enemy’s Fear Of A Black Planet have I heard an opener with the ferocity of ‘Fortress Europe’.

Asian Dub Foundation deliver a hefty sound and the lyrical content can be as equally weighty and if you need proof just listen to ‘La Haine’, a track that pays homage to Mathieu Kassovitz’s film of the same name. Marrying themes of revenge and justice to deep, heavy beat makes for a heady concoction and it wouldn’t seem out of place on the soundtrack of the monochrome masterpiece, ‘La Haine’. Taking a different route, but none the less powerful, is ‘1000 Mirrors’. Featuring Sinead O’Connor singing over a heavy dub reggae beat this tale of domestic violence has a sting in the tail that will haunt you long after the song has faded into the ether. Racial segregation, prison violence and police brutality are topics covered but if that all sounds a bit oppressive there’s also uplifting anthems such as ‘Rise To The Challenge’ to provide some light and shade.

Enemy Of The Enemy is a crossover album in its purest sense and straddles several genres with apparent ease. The band toured with bands as diverse as the Beastie Boys and Primal Scream, and it was with the latter that the Foundation burned their way into the nation’s consciousness. However, mad scientists fusing sounds they may be, but the result is a musical alchemy that’s hard to resist and you get the feeling that whatever style the band incorporate, it’ll slot neatly into their operandi. While most of this album is a riotous cornucopia of sound ‘Enemy Of The Enemy’ is parred back to just the bare beat and it made for a rather ominous closer. The silence that followed was always deafening so the addition of three bonus tracks freaked me out a little. I’m always happy to have extra tracks but after years of living with the original album they take a bit of getting used to. Of the three additional cuts ‘Illegal Minds’, a mixture of guitar and electronic that features Mark Stewart) is the prime cut.

In the musically confused decade that was the 1990’s Asian Dub Foundation stitched the prevailing eclecticism into a cohesive whole and Enemy Of The Enemy is the perfect summation of their prowess. 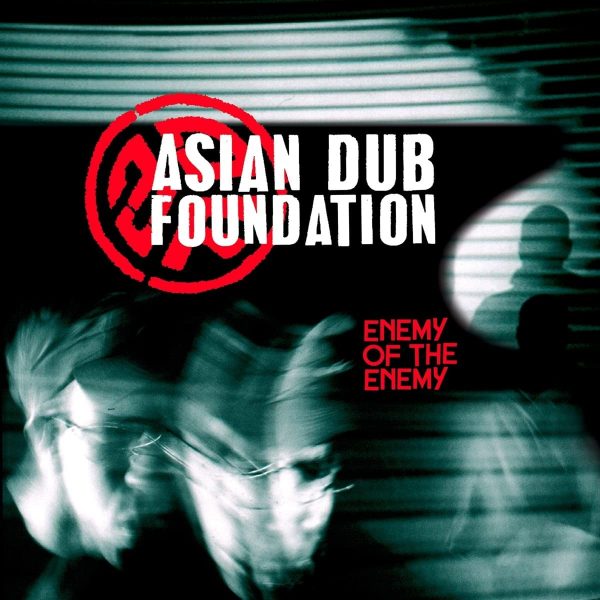