The reunion of the four original members of ASIA in 2006 to mark their 25th anniversary must count as one of the more unlikely reunions of recent times. At the time Geoff Downes was still recording and touring under the ASIA name (alongside John Payne) and Steve Howe was working full-time with Yes. But together with Carl Palmer and the late and much missed John Wetton, the original quartet put aside their well-documented interpersonal issues and reconvened for a tour to celebrate their landmark debut album which has sold over 10 million copies worldwide.

This box set brings together the four albums (one live, three studio) that marked this new era for ASIA and kicks off with Fantasia Live In Tokyo, a two disc set that encompasses all nine songs from the debut album along with a couple from the follow up Alpha and some selections from the individual members vast back catalogues. John Wetton retained his vocal range across his long career and his smooth delivery is very much at the forefront of the Asia sound. Highlights have to be ‘Wildest Dreams’, ‘Cutting It Fine’ and of course ‘Heat of the Moment’ but the whole show is superb and with the four clearly reveling in bringing the songs to life once again. Steve Howe is at his majestic best and it’s terrific to hear the band interpret ‘Fanfare for the Common Man’, ‘In The Court of the Crimson King’ and ‘Roundabout’. Although his role in Asia rarely allowed him to play at his flamboyant best in the studio, Carl Palmer shows his flair and dexterity throughout and gets the obligatory drum solo during ‘The Heat Goes On’.

After the reunion tour was heralded as a success ASIA returned to the studio to work on new material with the first result of their endeavors being 2008’s Phoenix. This was a sold return for the veterans and like the first two albums the songs mostly flowed from the team of Wetton and Downes with occasional contributions from Howe. Whereas this was a bone of contention first time around it had clearly proven to be a winning formula time and time again. With the songwriting duos knack of coming up with catchy melodies and lavish harmonies Phoenix is very much in pop rock territory, ‘I Will Remember You’ and ‘An Extraordinary Life’ being the standout moments.

2010’s Omega continued in much the same vein as its predecessor and proved to be another consistent set of songs that dip a toe into proggy waters but for the most part are melodic soft rockers. The piano led ‘Emily’ is another choice vocal performance from John Wetton and Steve Howe and Car Palmer get a rare chance to stretch out on the soaring ‘Holy War’ and ‘Finger on the Trigger’. Omega was yet another example of Asia doing what they do well and had it been released during their heyday would no doubt have given them some surefire hits.

This box set is a more than welcome reminder that ASIA were (and indeed are) much more than just the debut album. More releases to mark the bands 40th anniversary next year are in the pipeline and until then this deluxe box set marks of a period in ASIA’s history when all four original members were on top form. 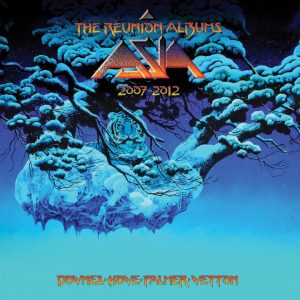