A live album from Asia is hardly a novelty (nor is the title the most original), but this one dates back to 1990 and includes 3 out of 4 of the original lineup. Guitarist Pat Thrall joins John Wetton, Carl Palmer and Geoff Downes in this 60 minute concert, recorded live for Nottingham’s Central Television, here in the UK. The band’s four eighties’ albums were governed by the law of diminishing returns. Alpha (1983), Astra (1985) and Then & Now (1989) perhaps weren’t armed with enough of the short, sharp bursts of epic grandeur that populated the self-titled debut (1982), but all were liberally sprinkled with polished tracks that married the members’ art-rock past with commercial nous.

Those tracks are presented here in this concert, offered in both CD and DVD formats. So yes, it’s a greatest hits/best of album, done live. The format combination is a clever idea. Asia are not the most animated of bands, and here, a lack of stagecraft – which is usually a vocational skill anyway – is amply balanced by the quality of the material and the musicianship of the artists. Despite cropping up on nearly every Eighties’ Rock Compilation albums ever released, ‘Heat Of The Moment’ still sounds fresh today, maybe gaining fresh impetus from Thrall’s compact, self contained guitarwork. That’s perhaps also true of ‘Go’ and ‘Voice Of America’, the two tracks taken from Astra. At the time, this album was unfairly criticised for wearing the well documented tensions in the band on its sleeve. But it’s hardly revisionist to claim that the album’s stadium shaped pop rock, best exemplified by these two tracks, was singularly underrated.

Elsewhere, ‘Time Again’ and ‘Heat Goes On’ are powerfully portrayed, underlining the band’s progrock pedigree, while ‘Only Time Will Tell’, clearly influenced by the New Wave style of the time, and the grittier ‘Days Like These’ pick up extra momentum and added muscle from the live performance. It’s not clear if any cleaning up or remastering has been done, but suffice to say the sonics are crystal clear, dynamic and pin sharp. 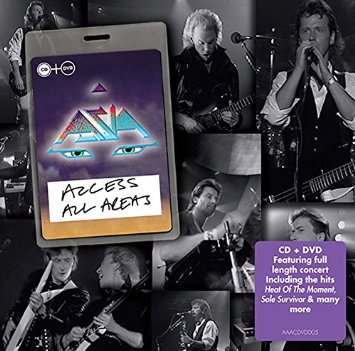