Throughout a chequered career Arthur Brown has never been one to play by the rules and when the chart topping The Crazy World Of Arthur Brown split nobody knew what the band’s namesake would do next. When he resurfaced several years later it was with the proto-prog, avant-garde Kingdom Come, a band so way out that time is only just catching up. Eternal Messenger: An Anthology 1970-1973 collects the band’s three albums along with a rare jam session and a disc of radio sessions to make the perfect introduction to Arthur Brown’s crazy world.

The experimental nature of Kingdom Come means those expecting the over the top histrionics displayed on The Crazy World Of Arthur Brown are in for a shock (quite literally) as Galactic Zoo Dossier takes a darker turn (with ‘darker’ being the operative world). Inspired by Arthur’s time in the States this effort is a complex, intricately woven concept album which finds Kingdom Come creating an alternative reality; an alternative world where humans are kept in a zoo and are controlled by external forces. Indicative of the sounds contained within as ‘Internal Messenger’ evidences a much more aggressive outfit who, after a rather arresting introduction, grab the listener by the scruff of the neck and lead them through some dark, dank netherworld. Like the album it introduces it’s a song of many suites and shades and its very eclecticism demands your full attention.

Galactic Zoo Dossier is ‘progressive rock’ in its purest definition. The songs challenge our expectations of what rock music can be and, while it initially confound the critics when first released, it holds up very well 50 years later. No space between tracks means that the songs either flow smoothly or jar abruptly but either way the sonic shifts are startling. With a kind of Sun Ra jazz sensibility ‘Metal Monster’ contains plenty of studio wizardry…so don’t adjust your hi-fi (your CD’s not skipping!). Galactic Zoo Dossier is an album that’s best consumed in one sitting; segue ways like ‘Brains’ and ‘Creep’ don’t hold up standing alone but are vitally important to the overall picture. Closer ‘No Time’ is a fine piece of prog that finds Kingdom Come hypnotising the listener, lulling you in to a false sense of security before landing a nifty sucker punch at the album’s conclusion.

With five bonus tracks added this is perhaps the definite version of Galactic Zoo Dossier. Contemporary single ‘Eternal Messenger’ is awash with retro organ and takes off as if to some distant planet while its flip side (I.D. Side To Be The C Side’) finds the band delving deeper into their collective psyche to get creative (which all good B-Sides should). An alternative version of ‘Sunrise’ becomes more late night blues with Andy Dalby’s guitar sounding especially lush. Likewise, ‘Space Plucks Dem Bones’ is vastly different to the version which appeared on Galactic and in moments of existentialism steps outside itself for a truly surreal listen and, on an album such as Galactic Zoo Dossier, that’s certainly saying something.

In our current age when artists spend aeons writing and recording albums it never ceases to amaze me the rapidity with which bands released albums in the ‘70s. Following their debut by 12 months Kingdom Come does sound a bit rushed and lacks a certain cohesion and grandiose vision found on its predecessor. Things get off to a sluggish start with ‘Water’, a track that drips tepidly rather than flowing with gusto. Two introductions don’t help matters and Arthur’s vocal gymnastics are held in check; once lighting up the sound like an over exuberant operatic singer he now seems strangely subdued. Kingdom Come limps along and it’s not until the fourth track, ‘Traffic Light Song’, that we hit a higher gear. It’s a groovy rocker with an insanely catchy riff and benefits from a direct approach that’s something which is seriously missing elsewhere.

The trouble with writing concept albums is that a band can get bogged down in the intricacies of a story when they should be focusing on the songs. That’s certainly the case here and there’s an introspective feel that’s best exemplified by ‘The Experiment (featuring “Lower Colonic Irrigation”)’, it’s all very anal (quite literally) and features associated sound effects. The lyrics are childish and quickly lose any semblance of charm: “I used to get up early in the morning/And listen to the rumbling of my bowels/And as my sphincter was yawning/That’s when I practised my open vowels”. ‘The Hymn’ is a closer that’s very choir-like and evokes images of alters and cloisters but, like much of Kingdom Come, it’s very flat and lacks the fizz and sparkle we usually expect from an Arthur Brown record.

The original album is bolstered by three bonus cuts and it’s here that we hit pay dirt as ‘Traffic Light Song’ makes a welcome return in an alternative form and an edited version of ‘The Hymn’ is better after some judicial pruning. Similarly, the extended version of ‘The Experiment (“Lower Colonic Irrigation”)’ cuts out the cheesy lyric, and is all the better for it. While certainly not a bad effort this is the weakest Kingdom Come long player, a status not helped by being sandwiched to between two stellar albums.

Iron Maiden vocalist (and Arthur Brown aficionado) Bruce Dickinson once described prog rock as the “theatre of the mind” and in the case of Journey, that’s spot on. Following the insipid Kingdom Come by a mere six months this release proved to be a stunning return to form. Ticking like an evil hypnotist’s watch ‘Time Captives’ finds the band veering into space rock territory and, foreshadowing the krautrock of Kraftwerk and Neu!, it goes off on a rather pleasant tangent. Using tone and texture to create a vivid soundscape ‘Triangles’ is an instrumental that’s akin to opening a door to another dimension and I’m sure David Bowie took inspiration from the nine minute ‘Gypsy’ when composing his Low opus. Journey is loosely based around the theme of space and ‘Gypsy’ is as cold and brittle as the centre of a black hole.

By the time Kingdom Come released Journey they had slimmed down from a seven to a four piece band (with drummer Martin Steers being replaced by a drum machine) and as a quartet the group sounds both focused and uncluttered. Heavy on the synths ‘Superficial Roadblocks’ is a three part musical suite which opens like the gates of Babylon and reveals a kingdom of dark delights. Avant-garde and ground breaking Journey was like nothing else released in that era and subsequently much of this record sounds timeless with only the penultimate ‘Spirit Of Joy’ indulging in some ‘70s rock clichés. Final track ‘Come Alive’ proved to be the band’s swansong and it ensured Kingdom Come bowed out on a high. Swirling upwards towards some infinitesimal point then disappearing into the ether ‘Come Alive’ ends on a suitably ominous tone.

Being a highly experimental band Kingdom Come would often explore ideas in the studio, three of the five cuts added here are alternative versions of album tracks, and it’s a delight to hear these songs in embryo. Also added is a single version of ‘Spirit Of Joy’  along with it’s associated B-side.

What is most remarkable about Jam are the circumstances surrounding its conception. Arthur Brown, after the dissolution of The Crazy World, placed an ad in the music press in 1970 seeking new musicians and those who answered the call (keyboardist Michael Harris, guitarist Bob Ellwood, bassist Dave Ambrose, drummer Rob Tait and percussionist Pete Bailey) headed straight for the studio. As with most pieces of musical alchemy the stars were aligned that day and, thankfully, the tapes were left rolling to capture this piece of magic. Lying in the vaults for years the resulting session was briefly released as Jam in 1995 but now, completely remastered, it gets a loving reissue.

Opening with Asiatic flourishes and the sound of the Japanese flute ‘Jungle Dreams’ is otherworldly and slightly discombobulating. It’s a slow builder that, almost imperceptibly, adds layers of sound until the listener is totally immersed in the song. Smoothly flowing into one long piece of music (hence the title Jam) ‘Inconstant Wisdom’ follows and finds Arthur delivering some fire-and-brimstone vocals and when you factor in some incessant tribal drumming you have a pretty heady mix. Jam gives an intriguing insight into many of the ideas which would later be developed; ‘Water’ introduces the theme which would later be surface on Kingdom Come and ‘Early Morning’, a nightmare in deep space, set the tone for Journey. When listening to Arthur Brown always expect the unexpected and the extended prog workout ‘Beholdin’ gets a bit funky while, as a finale, the band sail away on the keyboard drenched ‘Elementally’.

Collecting several sessions recorded over a period of 18 months At The BBC (1971-1972) is a disc that finds Kingdom Come blossoming. At that time the BBC’s Maida Vale studio was the most technically advanced in the country and the recordings presented here sound like exceptionally good demos; musically tight and well recorded. First up are two cuts recorded for Top Gear and both the synthesiser drenched ‘No Time’ and the evocative ‘Sunrise’ position the band somewhere between Deep Purple and The Moody Blues. Performing tracks from Galactic Zoo Dossier the Mike Harding Show session from 15th June 1971 stills sounds fresh and exciting and strangely…out there and it’s hard to believe such cutting edge music was performed on prime time radio.

When the band returned for an Alan Black Show session in September ‘71 they performed four tracks with the band in tight-but-loose mode with Arthur in particular unleashing some fine screams on an urgent ‘No Time’ before he gets all mechanical on ‘Metal Monster’. It was a full year until Kingdom Come next recorded a session for the BBC but when they returned it was in style for the John Peel show. Previewing tracks from the forthcoming Journey album ‘Slow Rock’ gets expanded to include a dreamy synth solo while its corresponding A-side gets a similar reworking on which Kingdom Come get all experimental while playing to an audience of millions…and why not?

The three albums that Kingdom Come released in the early 1970’s would, in modern parlance, be deemed “commercial suicide”. They weren’t written with any thought of hit singles or career advancement and, as with all good works of art, they were simply produced by a desire to create. Maybe that’s why much of the music of their peers sounds of a time while the music of Kingdom Come sounds timeless. 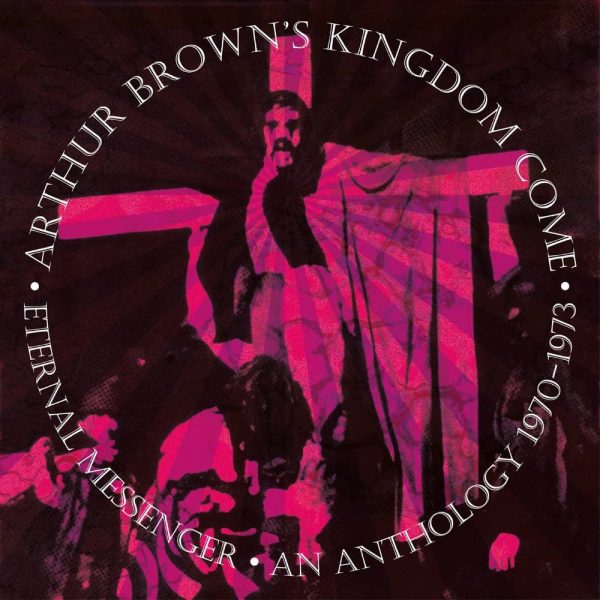