Rock fans whose musical tastes veers towards the eclectic should definitely check out the award winning ArcTanGent festival. Held at Fernhill Farm, just South of Bristol, from Thursday 15th to Saturday 17th August it features over 90 progressive bands who cover the whole spectrum of heaviness. 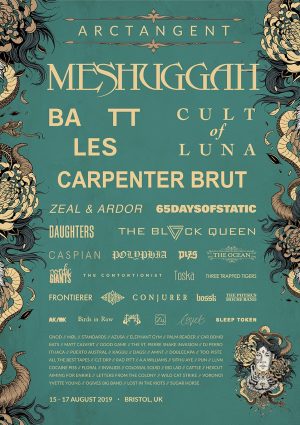 Four alternating stages in close proximity means you’ll never miss your favourite band and a strict capacity of 5,000 ensures ArcTanGent retains a friendly, family vibe. Unlike more corporate festivals ArcTanGent allows you to bring your own food and drink but, with the sumptuous meals and beer from local and independent breweries available in the arena, you won’t want to!

But music is the main reason for attending any festival and this year the ATG team have pulled out all the stops and have cemented their reputation as putting together consistently strong bills. Thursdays highlights include Rugby’s soon-to-be-massive Conjurer who’ll be slaying all with their heavy, punishing sound and also the Electric Wizard inspired Bossk. Headlining the opening day will be mysterious French darkwave artist Carpenter Brut who mixes rock, metal and electronica to create unsettling horror movie soundscapes. Keeping a deliberately low profile brings the music to the fore and is highly recommended for fans of Gost and Perturbator.

Fridays headliners are American experimental rockers Battles who will be mashing up math-rock, post-rock and prog. Featuring drummer John Stainer (Helmet) the band are known for their insanely catchy beats and heavy utilisation of self designed loops. Be sure to check out the humongous sounds of The Ocean and the passionate hardcore of Nottingham’s Palm Reader who are promoting their critically acclaimed album Braille. Another definite highlight are Leeds based Cattle, a band who rival early Black Flag for intensity.

Saturday is shaping up to be a great day with sublime math-rock sounds from Japan’s Elephant Gym. There’ll be some fine progressive metal from The Contortionist while Caspian will be giving a lesson in post-rock and Cult of Luna will be bringing their unique brand of sludge metal. Closing the festival in the best possible style will be Swedish heavyweights Meshuggah who’ll be making an exclusive UK appearance. A truly innovative band who push the boundaries of metal they’re a perfect fit for ArcTanGent. Largely ignored by the mainstream but prized by fans of heavy music their gigs are not to be missed.

A variety of ticket options are available. Check out https://arctangent.co.uk/tickets/