After a pandemic forced hiatus the award-winning ArcTanGent festival makes a triumphant return with over 100 bands covering the entire spectrum of all that’s good and heavy. This is one festival you definitely need to put on your ‘Bucket List’.

Held over three days (Thursday 18th to Saturday 20th August, with early entry available on the 17th) ArcTanGent is held in the rolling countryside of Fernhill Farm, Bristol. With a friendly West Country vibe, ArcTanGent encapsulates all that’s great about a music festival from the most mouth-watering food and drink money can buy to the envious line-up. Featuring five stages on a compact site, there’s no danger of missing your favourite bands, and that’s a good job because you’ll be spoiled for choice. Check out these highlights:

For those of you who arrive early on Wednesday there’s a treat waiting for you in the shape of local band, The St Pierre Snake Invasion. Other highlights on the Elephant In The Bar Room stage will be Sugar Horse, Modern Rituals and Mother Vulture.

Thursday is shaping up to be an exceptionally strong day and features some real legendary names including French black metal collective Alcest, Swedish metal heavyweights Cult Of Luna and, all the way from New York City, Century Media recording artists Imperial Triumphant. Other bands you should catch include Belgium’s hardcore heroes BEAR, the brute force of Bossk, and Nottingham’s metal maestros earthtone9.

Friday is as equally strong with Norwegian extreme metal band Enslaved taking pride of place. Formed in 1991, Enslaved are a band in constant evolution and their incorporating progressive rock and jazz into their sound makes for a live experience like no other. Hailing from Japan, MONO are an instrumental post-rock band who deliver an intense live show, and one that’s not for the faint hearted. Other acts to catch are Covet, Intervals and Palm Reader.

To say I’m excited about Saturday’s line-up would be something of an understatement especially as Opeth will be making an appearance. Progressive in its truest definition, there’s not a single genre that’s out of bounds to this Swedish crew and their live show is equally eclectic. There’s plenty of home grown talent on display too so be sure to check out Milton Keynes’ TesseracT and Rugby’s Conjurer.

**Stop Press** Those groovy guys at ATG have just announced the bill’s final additions and they’re a stellar bunch: post-hardcore/metalcore from Austin Texas in the shape of TWDY (This Will Destroy You), Birmingham’s industrial metal pioneers Godflesh, and London’s Devil Sold His Soul who are riding high on the back of their 2021 album Loss. Puppy, Still, Respire, Dead Bird, Ni Maitres and Peach complete the line-up…we’ll see you in the pit!

A variety of ticket options are available here. 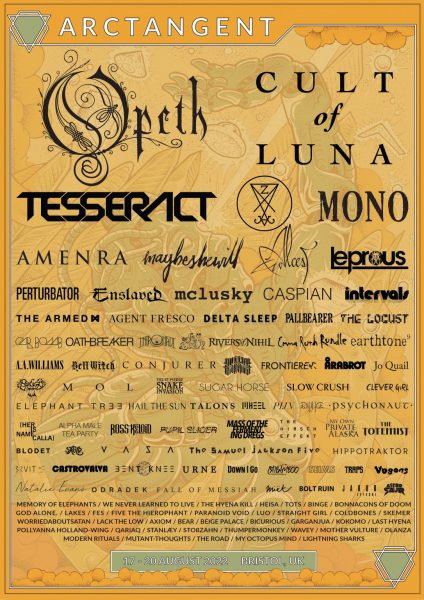