With a few obvious exceptions hard rock and metal bands from Canada often get overlooked and Nova Scotia’s April Wine didn’t gain international recognition until their ninth album, 1978’s First Glance. Collected here with 1980’s Harder…Faster on one disc it’s an impressive set that should only enhance the bands reputation.

Formed in late ‘69 April Wine’s career got off to a spluttering start as line-up changes, label tribulations and management issues all conspired to halt their progress. Despite a few hits they never really reached their stride until a decade later with First Glance and, such was the step up in class, the uninitiated thought it was the bands debut album. Arriving with a confident swagger ‘Get Ready For Love’ is a strong opener that dances from speaker to speaker but things really hit top gear with ‘Hot On The Wheel’s On Love’. As ballsy rock n’ roll goes it doesn’t get much better than this; with plenty of slide guitar, cowbell and some ear piercing screams from Myles Goodwyn it encapsulates all that was good about late ‘70s hard rock.

One area where First Glance fell a little short was on its plethora of power ballads: they’re much in the vein of Badfinger; that formulaic, schmaltzy type of song with which rock bands often invaded the charts. They’re all well composed but three ballads on a nine track album gives a rather unbalanced feel and that’s a shame because the rest of the record really rocks hard. Like Nazareth and The Doobie Brothers rolled into one ‘Right Down To It’ is a delicious slice of rock as is the riff heavy ‘Roller’, the single which broke the band in the States. ‘I’m Alive’ and ‘Let Yourself Go’ both speed along before April Wine outdo The Eagles on epic closer ‘Silver Dollar’.

1980 turned out to be a pivotal year for April Wine. A triumphant appearance at the inaugural Monsters Of Rock festival was accompanied by the aptly titled Harder…Faster and if found the band at the peak of their powers. With a sound that recalls the more melodic end of NWOBHM (think Demon or Saracen) Harder… was an eight track bruiser. In addition to guitarists Brian Greenway and Gary Moffet vocalist Myles also played the six string and it’s a three pronged axe attack that’s put to great use on ‘I Like To Rock’. You might expect such an approach to sound cluttered but they play off each other with great effect. Lyrically too, the triple point vocal harmonies create a rich, chocolatey feeling which renders this album as delectable ear candy.

Bold and brash, Harder…Faster is much more confident than its predecessor and, predominantly featuring uptempo tracks, it’s a more rounded listen. It’s an album that’s dominated by neat time changes with ‘Tonite’ and ‘Ladies Man’ crashing through the gears. No frills, but plenty of thrills, ‘Babes In Arms’ and ‘Better Do It Well’ are both weighty, riff heavy numbers, the latter with a little Cheap Trick and the former with a lot of Blue Oyster Cult. Rearranged for a guitar trio King Crimson’s ‘21st Century Schizoid Man’ is given the April Wine treatment. Now infinitely heavier, and with plenty of scope for those nifty time changes, I think it’s a vast improvement on the original. 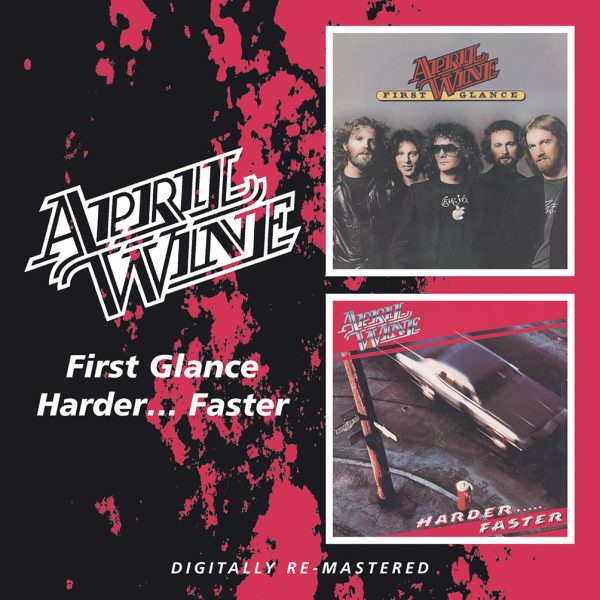