Hailing from Wolverhampton openers Electus are something of a power trio who deliver an earth rumbling sound. Powered by a hard hitting drummer who’s heavy on the cowbell (always a good sign in metal) they perfectly marry that classic Iron Maiden gallop to the Pantera punch. Arriving like a fist to the face a distinct lack of solos gives proceedings a hardcore feel while plenty of neat time changes keep things interesting as the band deliver a well received set.

The aptly titled Ragdoll Sunday hit the stage like a tornado as they place their foot on the throttle and don’t let up for 35 blistering minutes. A charismatic vocalist juxtaposes clean vocals with the guttural and by second track ‘One Day’ the band are firmly in their unique groove. New track ‘Welcome to the Music Industry’ bodes well for the forthcoming EP as the guitarist pulls impossible sounds from his six strings and the bass and drums combine with the force of a buffalo stampede. There’s plenty of variety on offer but final track ‘Prophets’ marks them as ones to watch. 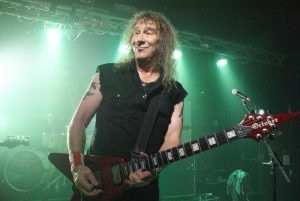 Perennial metal survivors Anvil make a welcome return to Milton Keynes’ premier live music venue. A profile raised, and a career revitalised, by The Story of Anvil movie means that the band were able to focus full time on their music and it has paid dividends with a string of great albums the most recent of which, ‘Legal at Last’, they’re touring tonight. However they open with a trio of classic tracks the first of which, the instrumental ‘March of the Crabs’ finds Lips playing guitar in the middle of the crowd. Then he’s back on stage as the band are bathed in blood red light and swirling dry ice for the demonic ‘666’. ‘Ooh Baby’ is unleashed and well received with waves of affection radiating between band and crowd. Like ‘Sweet Leaf’, only for the speed metal generation, ‘Legal at Last’ is a homage to their favourite pass time and the following ‘Nabbed in Nebraska’ is a cautionary tale of said hobby. 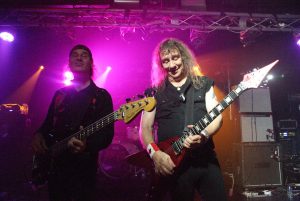 Lead vocalist Lips is like a cool dad who never lost his enthusiasm for metal as the aptly titled ‘Badass Rock n’ Roll’ is paired with ‘Winged Assassins’ which appears like an army of avenging angels. Lips’ regales some of the very best Lemmy stories as ‘Free as a Bird’ is dedicated to the classic Motörhead trio. An incendiary ‘On Fire’ follows along with the far from unlucky ‘This is Thirteen’. Lips’ infamous golden vibrator makes an appearance during ‘Mothra’ and raises more than a few smiles. It’s an open secret that Anvil were influenced by Benny Goodman’s big band sound and that shines through on ‘Swing Thing’ which segues into a Robb Reiner solo that proves him to be metal’s premier drummer. ‘I’m Alive’ brings the set proper to a raucous conclusion before the band return for two well deserved encores. A pounding ‘Forged in Fire’ pops a few eardrums before ‘Running For My Life’ brings the set to a suitably adrenaline charge conclusion. Here’s to the next 43 years! 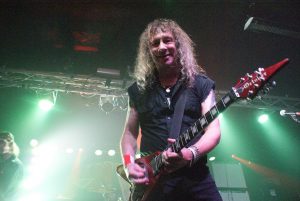 March of the Crabs

Free as a Bird

Running for My Life 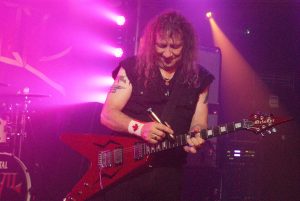