A church organ makes for a particularly inauspicious intro to a black metal album. Once the dark keys have finished their solemn sermon Antzaat take their cue, opening up with a rushing riff river that while powerful is also perfectly pitched with a flowing melodious heart at its core.

A couple of precursory drum fills heighten the anticipation levels further after which the Belgian barbarians let rip. It’s an exhilarating opening to their debut album and leaves you looking forward with relish to the further blastbeat bombardments and white-knuckle rhythmic rides to come.

The album’s title track opens with a siren-like call to arms before vocalist and guitarist Ronarg bellows ‘Are You Men Who Gaze into the Sun’ in the style of Primordial rabble-rouser AA Nemtheanga. While the blastbeats drop like overhit golf balls they are cushioned by Nihil’s incessant grooves which while razorwire sharp are also sustained by searing melodies.

‘Crown of Concrete’ continues the aural assault in great fashion as Antzaat warm to their task. Their mission statement is not necessarily as cut-throat as some of the bands on Immortal Frost. The Belgians unleash a torrent of blackened bullets but pick their targets well, rather than just randomly spraying in ad hoc fashion.

After a fierce start that has probably drawn blood from the overworked blistered fingers of Ronarg and Nihil, Antzaat bring the tempo down a notch as they get to work on ‘Through The Eyes Of A Rotten Mind’. It’s an altogether doomier offering, but one in which striking rhythmic shafts illuminate the otherwise dark diatribe.

Antzaat impressed with their debut EP The Black Hand of the Father (2017) and have clearly built upon those foundations with their first full length release. ‘Radiant Fire’, the longest track here, features the same harsh vocals from Ronarg that you could probably grate cheese with. Again though, and despite the cold resonance of their delivery, the raging inferno serves up the complimentary warmth, the two extremes blending together impeccably like a well-stirred cocktail to make for a pulsating platform of black metal.

‘Veil of Darkness’ is even more robust in its approach. The whip is well and truly cracked, sparks fly as it hits the floor and what follows is the kind of onslaught that would send a circle pit spinning like decapitated chicken. Ronarg’s twisted tones sound even more depraved than usual on what is an album highlight.

The power surge simply transfers, without so much as pause for breath, to ‘Man Made Flesh Made God Machine’. Once more Antzaat are in merciless mood, the antagonistic cuts are forged deeper than ever as the bludgeoning Belgians’ remorseless search for sonic redemption becomes increasingly frantic.

Shunning the option for a quiet exit route, Antzaat take to the battlefield for one final thrust on ‘And This Day Shall Come Again’, another tumultuous track in which all four band members give everything. But even when carving out this destructive maelstrom to finally seal the deal on For You Men Who Gaze Into The Sun beacons of light filter through the abyss, fueled by a devastating dual force of accomplished riffage. 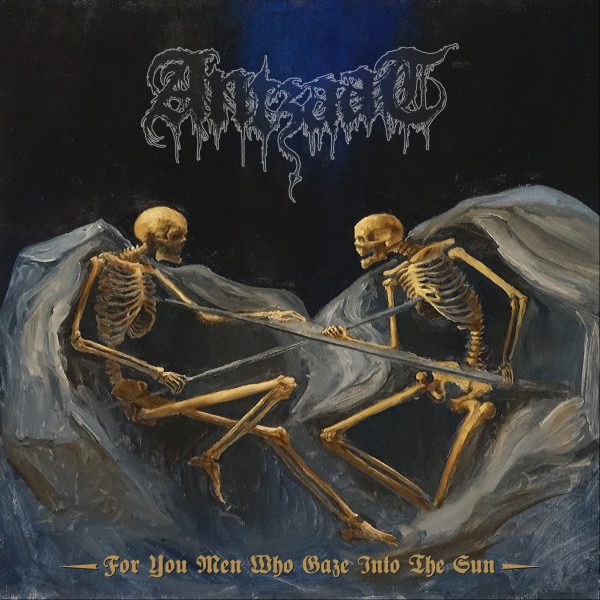