After a ten year absence, AntropomorphiA reformed in 2009 and delivered their first album in fourteen years in 2012,Evangelivm Nekromantia (reviewed here). Appearing at a time when thanks to the interweb, you couldn’t move without stepping in piles of all forms of extreme metal, it was – and still is – an absolute bruiser of an album that still stands tall amongst the plethora of releases from many a death and black metal band that had emerged during their absence. Two years on and the band are back with Rites of Perversion, another bare-knuckle bastard of death metal debauchery.

Yes, it’s good. Very fucking good. Where Evangelivm… was more groove-based and atmospheric, Rites… is violence incarnate. Old school with the odd modern element, the atmosphere and the groove are still present – particularly in M’s phenomenal drumming – but there’s a depth to this album that’s enhanced by a more direct approach to the songwriting. Opener ‘Tempioth Workings’, for instance, begins by carving out a brutal melody that introduces a track that plots a continual development and never loses sight of its core. Yet while all eight original tracks are clenched tighter than a charity working nun that’s accidentally happened upon a midnight orgy at Anton LaVey’s gaff, there’s plenty of room written into the dark fabrications that let the band breathe a darker breath than this album’s predecessor.

Beautiful and dark, Antropomorphia have excelled themselves. While they have made significant progression since Evangelivm…, their roots and their devotion to the deathly hallows are firmly in place. Where some bands add an occasional cover version to their albums in some feeble attempt to give themselves some degree of credibility, AntropomorphiA’s excellently executed cover of Death’s ‘Open Casket’ here acts as confirmation, as affirmation, as validation that this is a band that knows their history and how to pay it the respect it deserves. Returning from the mausoleum of murderous metal in 2009 was a timely move. And with Rites ov Perversion, AntropomorphiA mark themselves out as one of death metal’s finest. 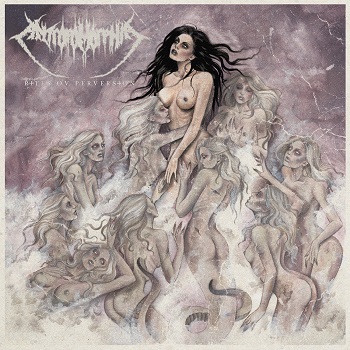