Formed by vocalist Martin Roper and guitarist Dugi Bell in 1978 Derby’s Anti-Pasti were at the very vanguard of the second wave of punk. Anti-Pasti, along with The Exploited and Discharge, shaped the nascent UK82 sound and provided the soundtrack for a whole generation of disaffected youth. Simply titled 1980-83 this three-disc set features their first two albums plus a disc full of contemporaneous rarities.

Quickly earning a reputation for their raucous live shows Anti-Pasti were quickly snapped up by indie label Rondelet and released their debut effort The Last Call… in August of ‘81. The call to arms ‘No Government’ kicks the album of in fine style with buzzsaw guitar and relentless drumming while Roper’s suitably snotty vocals unleash a torrent of abuse against those in authority. Yet, for all its sonic rage, ‘No Government’ remains as catchy as hell and I guarantee you’ll be singing “no Maggie Thatcher and no government” at the most inappropriate moments. The tumbling instrumental ‘Brew Your Own’ follows which segues into ‘Another Dead Soldier’. This is punk in its most visceral and, bereft of any abstract leanings, it cuts through all the B.S. to take the most direct line to what it’s all about.

Like many of their generation Anti-Pasti grew up in the shadow of the bomb and there’s a certain preoccupation with war that runs throughout The Last Call… (although not as obsessively as Discharge) and ‘Call The Army (I’m Alive)’, ‘City Blow’ and ‘Night Of The Warcry’ are united by a common lyrical theme. 14 tracks in 30 blistering minutes should tell you all you need to know but Anti-Pasti are far from being one trick ponies as ‘Freedom Row’ eases up on the throttle for a more measured affair and the following ‘St. George (Gets His Gun)’ veers into pop punk territory. Dripping with defiance ‘Ain’t Got Me’ fairly races along while ‘Hell’, barely breaking the 60 second barrier, goes straight for the jugular.

Closing with an ill-advised rendition of The Stooges ‘I Wanna Be Your Dog’ (some songs should never be covered) can’t detract from the majesty of The Last Call… and it’ll forever remain a cornerstone of the UK82 movement.

Released barely a year after their debut album many have considered their sophomore effort Caution In The Wind a rushed affair. However, Anti-Pasti made a deliberate sonic shift to distance themselves from a nefarious right wing element that had latched onto the band. The addition of a second guitarist (Olly Hoon) found Anti-Pasti moving in a more melodic direction that wasn’t too dissimilar to The Alarm or Spear Of Destiny. With a full on lush production album opener ‘Caution In The Wind’ is anthemic rocker that is given plenty of room to breathe while the following ‘One Friday Night’ explodes in glistening shards with the extra guitar adding a depth that was missing from their debut.

I imagine the consternation surrounding Caution In The Wind was similar to that which greeted the Clash’s Give ‘em Enough Rope. Some lamented the more polished sound but you have to give the band props for not playing it safe and producing a Last Call mark II. Producer Neil Black (Bow Wow Wow, UB40) has used all sorts of studio wizardry to give Anti-Pasti a huge sound and the albums lead single ‘East To The West’ still sounds fresh and vibrant. There’s none of those short bursts of fury found on the debut, only more measured tracks like ‘Agent ABC’ and ‘The Best Of Us’ that recall latter day Clash.

In retrospect maybe Anti-Pasti did move on too fast and we can only imagine how the spiky tops greeted album closer ‘Beyond Belief’ with its cascading keys and saxophone and the punks, voting with their feet, didn’t buy as many copies as Caution In The Wind.

Those who prefer Anti-Pasti in the earlier guise with revel in this third disc that collects together many of the bands early releases beginning with their debut EP Four Sore Points. Housed in a killer sleeve (featuring an axe embedded in a head) and originally self-released it caught the ear of Rondelet Records who gave it a proper release and propelled it into the independent chart for 66 weeks. Their next release came via a split 7” with fellow rebel rouser’s The Exploited in the shape of Don’t Let ‘Em Grind You Down to which they donated ‘Ain’t Got Me’ and ‘Another Dead Soldier’.

Attesting to their live power three live tracks are included (including an improved version of the aforementioned ‘I Wanna Be Your Dog’) and, as a historical record, they’re priceless. Recorded on the (in)famous Apocalypse Now tour, with The Exploited, Discharge and Chron Gen, it’s easy to hear why the band were signed on the strength of their live show. Of the remaining tracks ‘Hell’ is a definite highlight with the band stretching it to three times its original length (albeit interspersed with studio chat) and a reworked version of ‘Call The Army (I’m Alive). ‘Burn In Your Own Flames’ provide a bridge between their first and second albums and the final two cuts were recorded for that sophomore album (and used as b-sides).

Of all the UK82 bands who came to national prominence Anti-Pasti are perhaps the least remembered and that’s rather unfair. However, this three disc set, lovingly compiled and packaged, seems certain to rectify that. 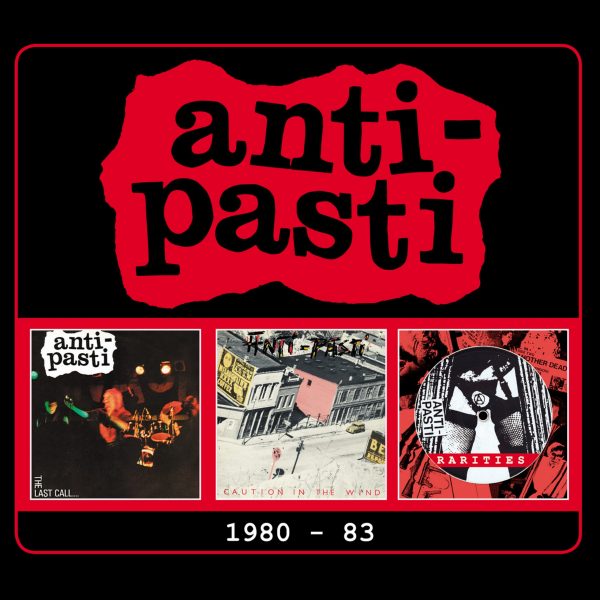