On entering the O2 Academy you’d be forgiven for thinking it was 1986, as there’s plenty of old school thrashers dressed in the height of fashion: high-topped sneakers, patched denim and baseball caps. However, the merch prices certainly aren’t 1986, and a few eyebrows are raised about the £35 t-shirts, but music is the reason we’re here and US thrash legends Anthrax kick of their 40th anniversary UK tour (delayed a year due to Covid) right here in the home of heavy metal. 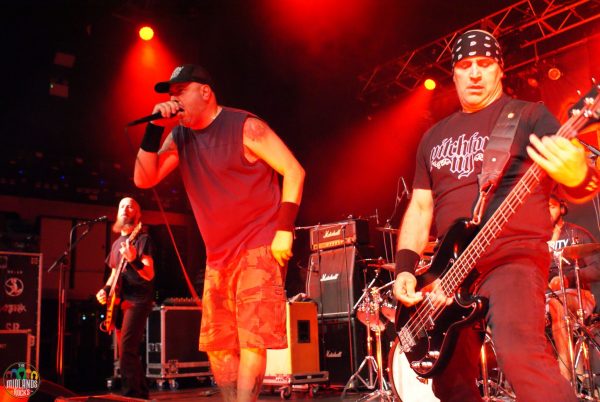 I always thought about Anthrax as a gateway drug; you could get into other cool stuff by the songs they’d cover, or the bands they pick as support, and tonight’s revelation are Sworn Enemy. Although the band have been around since ‘97, this is the first time they’ve come on my radar, and I’m wondering where they’ve been all my life. Hailing from New York, they put the ‘hard’ into hardcore (think Cro-Mags, Agnostic Front) and meld it to a metallic sound that’s not too far removed from classic Biohazard. Cutting the appearance of an unruly street gang, they proceed to dish out a 30-minute pummelling with highlights including ‘Here Today’ (into which they throw a few bars of ‘Raining Blood’) and aptly titled closer ‘We Hate’, and I’m certain Sworn Enemy have made many new friends tonight. 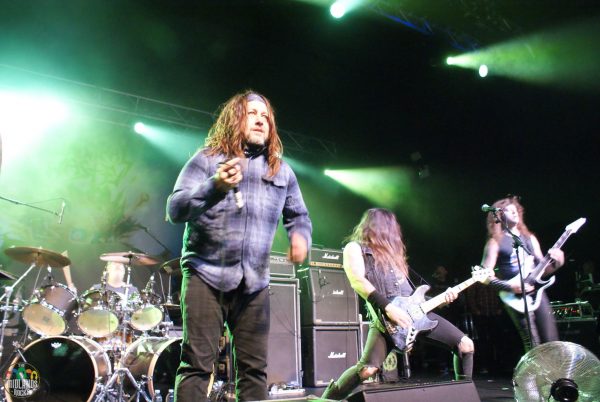 Although Municipal Waste have recently come of age via their 21st birthday, there’s still something very juvenile about the band (and I mean that in the best possible way) and it comes across in their sheer love of music. Their songs about mutants, nuclear warfare and alcoholism reminds me of why I originally fell in love with thrash metal, and their songs, short, sharp, shocks each one, go straight for the throat and as the first power chord resonates, the crowd explode like a volcanic eruption. By the time we reach fourth track, ‘Breathe Grease’, a huge circle pit has opened up and waves of crowd surfers crash over the barrier. ‘Headbanger Face Rip’ takes the level of insanity to a whole new level and features some fine vocal gymnastics from Tony Foresta. The title track from new album Electrified Brain reminds me of Sacred Reich’s ‘Surf Nicaragua’ (which is a good thing) and Municipal Waste’s 15 track musical holocaust ends in style with ‘Born To Party’. 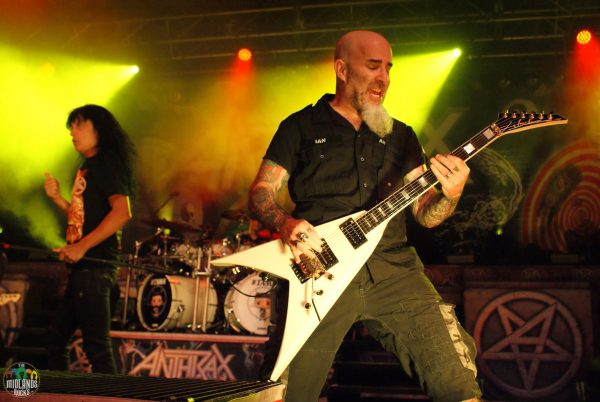 40 years in any business is a long time, but in the neck-snapping world of thrash metal, it’s an eternity. Throughout a tumultuous career that’s had its fair share of ups and downs, Anthrax have remained solid and unshakable. In fact, if the world were obliterated in a nuclear war, I’m sure you’d find these New York thrashers playing somewhere amongst the smoking ruins. As you might expect from a band in their fourth decade, Anthrax know how to make an impactful entrance, and onto a huge white sheet a compilation of celebrity fans is projected who all bestow virtue upon the band. Chuck D, Dave Mustaine, and Henry Rollins are just a few of the artists heaping praise, then guitarist Scott Ian is silhouetted in a spotlight and the tension is drawn out to an almost unbearable level. The sheet drops away and the band appear to the opening refrain of ‘Among The Living’, and no entrance could be more grandiose, or more effective. Like five rabid dogs who are suddenly unleashed, Anthrax are a blur of energy with vocalist Joey Belladonna covering every inch of the stage, bassist Frank Bello becoming a headbanging monster and Scott Ian performing his “stomping out a fire” dance. It’s a musical and sensory overload…and it’s only the first song! With barely a pause for breath, another track from Among The Living follows in the shape of ‘Caught In A Mosh’, before ‘Madhouse’ does exactly what it says on the tin and instigates all sorts of mayhem in the pit. 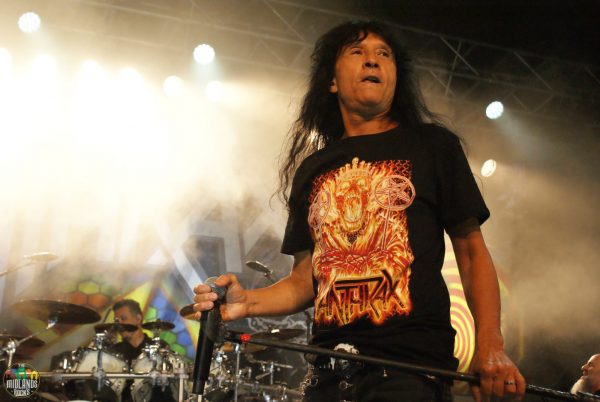 Tonight’s set reads like a “greatest hits” set and bounces around all points of the band’s career with ‘Metal Thrashing Mad’ taking us back to the band’s genesis and the Trust cover ‘Antisocial’ (from 1989’s much maligned and misunderstood State Of Euphoria) causing a huge singalong. However, chock full of classics the set might be, but the band still find time to dig deep in their discography for fan favourites such as ‘Medusa’ and ‘Only’. Anthrax look like there’s nowhere in the world they’d rather be tonight than rocking Birmingham’s O2, and sparks fly from the stage when Scott steps up to the mic to deliver a visceral ‘Bring The Noise’. That segues straight into set closer ‘Indians’, and the cry of “WARDANCE!” mid-song is the cue for everyone to tap their energy reserves for one last mosh. An encore is demanded, and granted in the shape of ‘Efilnikufesin (N.F.L.)’ and it ensures no one leaves disappointed.