As we head into Halloween territory, BLOODSTOCK has dropped an absolute face slasher of a band announcement!  Here’s the latest on what’s coming to Catton Park in 2023!

Swedish metal luminaries IN FLAMES land themselves Friday’s special guest slot on the Ronnie James Dio main stage. Last month, the band dropped a video for new track, ‘Foregone Pt. 1’ (above), taken from their forthcoming album, Foregone which is set for release in Feb 2023. Perhaps BLOODSTOCKers will get to hear some new tunes live!

Saturday’s RJD main stage special guests are the mighty ANTHRAX!  2021 marked the band’s 40th Anniversary and to celebrate, they recorded the ‘XL’ livestream which was released digitally this Summer (and will be available on BluRay later this year). Check out their performance of ‘Aftershock’ here.

Also grabbing main stage slots on Sunday are Brazilian metal icons SEPULTURA, who recently played an incredible set at this year’s Rock In Rio together with the Brazilian Symphony Orchestra and Cali alt rock squad UGLY KID JOE, who release their new album, ‘Rad Wings Of Destiny’ later this month.  Check out ‘That Ain’t Livin’, the lead track from that record, for all the AC/DC vibes.

NY hardcore legends BIOHAZARD are set to headline Sunday night on the Sophie stage, with their original line up!  Check out their monster landmark track, ‘Tales From The Hard Side’ taken from their classic State of The World Address album.  Also landing a Sunday slot are retro sounds from the brothers and sisters of the CHURCH OF THE COSMIC SKULL.  If you’re not yet aware, get a handle on their 70s psych rock with the video for ‘Sorcery & Sabotage’.

In addition, the grass roots music-supporting METAL 2 THE MASSES 2023 programme is underway!  If you’re a self-released or unsigned band, throw your hat in the ring to land a slot on BLOODSTOCK’s New Blood stage next August. Regions announced so far are: CHESTERFIELD, NORTHERN IRELAND (Belfast), REPUBLIC OF IRELAND (Dublin), SHEFFIELD, HITCHIN, MANCHESTER, MILTON KEYNES, BOURNEMOUTH, LEEDS, NEWCASTLE UPON TYNE, ESSEX (Colchester), KENT (Gravesend), BRISTOL, NORTH WALES (Wrexham), LEICESTER, STOKE ON TRENT, SOUTH WALES (Cardiff), NOTTINGHAM, DEVON & CORNWALL (Saltash), SCOTLAND (heats locally, final in Edinburgh) and LONDON. Full details of venues and who to contact to enter in each region, can be found here or on Facebook.  Heats kick off soon!

BLOODSTOCK’s 2023 Ronnie James Dio main stage headliners are KILLSWITCH ENGAGE and MEGADETH, with the third to be announced in the coming months.  Also appearing are DEVILDRIVER, FIT FOR AN AUTOPSY, DECAPITATED and GATECREEPER, plus over on the Sophie Lancaster stage, expect to see ZEAL & ARDOR, KING 810 and UNTO OTHERS.  Many, many more are yet to be announced.

With tickets selling faster than ever, all VIP packages and campervan passes are already sold out and Early Bird tickets are down to their last few, at a discounted price. Grab yours now at the ticket store.

Get full festival information at bloodstock.uk.com. 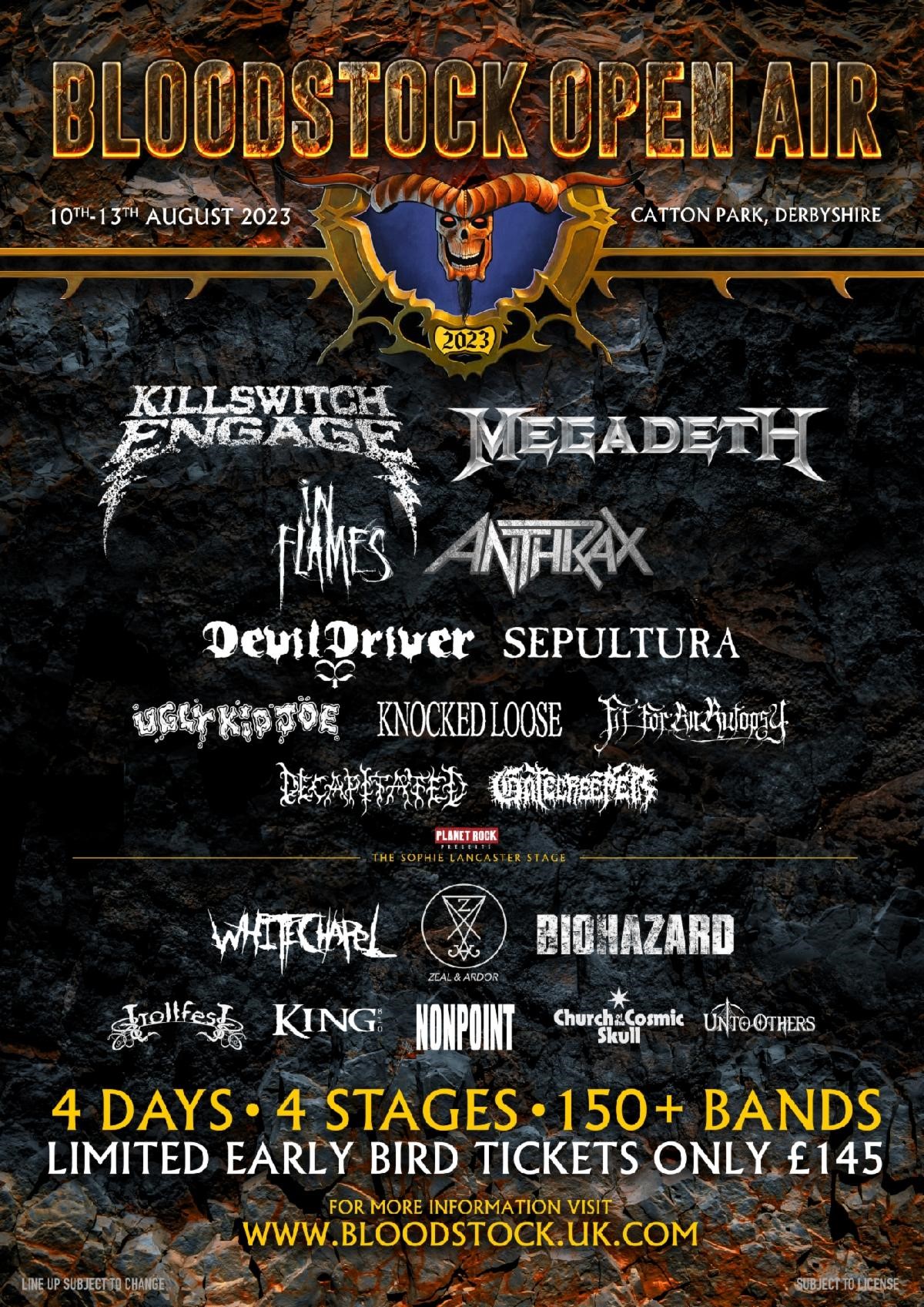