How the years fly by. It seems like only yesterday that we were all raving about this new band and how their album Alice in Hell was causing a ripple within the metal community. We would all talk about the latest Thrash Metal sensation from Canada making the speakers on the Friday Rock Show with the late Tommy Vance rumble to their earthquake riffs. 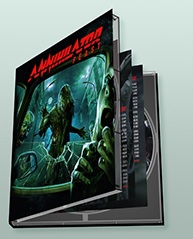 Annihilator is essentially Jeff Waters, having been the only consistent member from the beginning and the focal point of all things Annihilator. Their latest offering, Feast, is carrying on the tradition of NWOBHM combined with elements of Thrash to form a sound that has certainly lasted the test of time.  Opener ‘Deadlock’ is a 100mph, headbanging, foot-to-the-floor Thrashfest which carries on for second track ‘No Way Out’. Things then take a slight twist with ‘Smear Campaign’ taking a more Hard Rock stance. The funk bass, almost reggae groove of ‘No Surrender’ is somewhat of a mystery to me, from the all-out initial assault this stands out like the third tit on that woman in Total Recall. What is apparent though is that this is an album comprising of some sublime metal compositions with the final tracks tipping the scales at six-minutes-plus each in length. From the acoustic interludes of ‘Fight The World’ to the eight and a half minute ‘One Falls, Two Rise’, Annihilator have produced something all fans will welcome. These guys are not on the coat tails of anyone. They’ve got here through their own merits and still producing relevant metal albums that Metallica and Megadeth should take note of.  If they continue in this direction, I’m sure we’ll be hearing a lot more from Annihilator for years to come.

A second CD (if you purchase this edition) comprises of a collection of tracks re-worked and re-recorded from their vast back catalogue. Fifteen tracks featuring metallic delights like the anthemic ‘Alison Hell’ (which could easily have been a King Diamond cast off) and ‘Never, Neverland’ are here to re-kindle your love for the tracks or maybe introduce new fans to the vast work of a band often overlooked. And with a DVD of their performance at Wacken Open Air in 2013 that proves what a force they are on stage included in the deluxe edition – with a 3D cover and 16-page booklet – you’d be a fool not to snap it up. If this is your first introduction to Annihilator, it will not be your last.