At any one time, there are a dozen or more bands clogging up the highway back from the seventies and eighties. Most are chugging along in the slow lane, leaking oil, looking for a suitable bandwagon to jump on.

Angel, the Seventies’ band who paved the way for the rise and rise of the Glam/Hair metal phenomenon, have no such problem. And the big story is not that they are back, but that if anything, the power and the passion are stronger now. This is the new improved Angel, each and every song has a gleam in its eye and a strut in its step. Big production numbers like the anthemic ‘Shot Of Love’, seventies parody ‘Slow Down’ (a lyrical nod to Larry Williams) and the emotive survivor’s hymn, ‘We Were The Wild’ relive the fervor, the flair, and the aspirations of a band who were shunned by the moment, but who have grafted and crafted, and have now created a new opportunity with Risen. And given the last studio album from the original band came out in 1979, there are no prizes for finding a meaning in that title.

Surprisingly roadworthy originals, vocalist Frank Dimino, and guitarman Punky Meadows have surrounded themselves with new blood, new talent, new ambition. They are joined by Charlie Calv on keyboards, a veteran of some great bands and albums, esp the Shotgun Symphony stuff back in the nineties. Plus Danny Farrow (g), Billy Orrico (d) and Steve Ojane (b). Six guys firing on, er…all six.

After the brief but dramatic instrumental prelude, ‘Angel Theme’, this 17 track, 73 minute marathon unfolds along satisfyingly conventional lines. Not every track is an instant hit, but it’s an exhilarating Rock’n’Roll ride. The poppier tracks like ‘Over My Head’ and ‘Turn Around’ are rich in melodic detail, and are light on their feet. The tougher stuff, like ‘Under The Gun’ , ‘Revolution’ and ‘Standup’, is brimming with fire, and flaunts a flinty edge of defiance.

Arguably, ‘1975’ is the album’s prime cut, a harmonised articulation of the band’s backstory, full of moody introspection and sepia tinged melancholy. It’s a nice break from the blazing riffs and heavy percussive thump that we hear around it.

‘Locked&Cocked’ and ‘Desire’ go off tangentially. One is a misplaced blues workout that sits uncomfortably with the surrounding material… a rare mis-step in among 17 tracks of compelling, dynamic rock’n’roll. The other shows a more economical use of guitar, bass and drum power, with shades of rockabilly and R&B shining through, it’s a notable variation on the band’s hitherto approach.

So, not every piece might fit, but there is no question here, Risen comes from a band well worthy of its vigorous renewal. 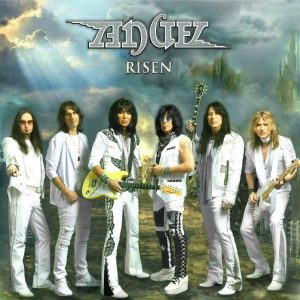