He was born on a summer day, 1951 – and Andrew Gold undoubtedly had a rich and diverse career. He was one half of Wax with Graham Gouldman, he was a gifted multi-instrumentalist and an in-demand session musician who made major contributions to Linda Ronstadt’s breakthrough album Heart Like A Wheel and played with artists including Don Henley, James Taylor, Carly Simon, Art Garfunkel and Cher. The songs he wrote became hits for 10cc, Wynonna Judd and Trisha Yearwood and the themes to two Emmy award winning sitcoms, yet he also recorded an album of trip out psychedelia under a pseudonym (The Fraternal Order of The All) just for fun. He toured with The Eagles, Linda Ronstadt and Jackson Browne and from 1975 to 1980 he produced four solo albums that are the subject of a 6CD/DVD retrospective, Lonely Boy: The Asylum Years Anthology.

Andrew Gold’s eponymous debut album is a classy and assured affair. The gentle, James Taylor-esque ‘That’s Why I Love You’ gave Gold his first minor US hit, though quite why the catchy, harmony laden country rock of ‘Heartaches In Heartaches’ didn’t precede it by bounding up the charts remains a mystery. Two of the strongest cuts on the album, ‘Love Hurts’ and ‘Endless Flight’, showcase Andrew Gold’s ability to produce beautifully crafted ballads – a talent recognised by Leo Sayer when he covered the latter and made it the title track of his 1976 album.

Released in 1976, What’s Wrong With This Picture reunited Gold with Linda Ronstadt’s producer Peter Asher. The album gave Andrew Gold his first UK hit single (and his biggest hit in the USA) with the excellent and pseudo autobiographical ‘Lonely Boy’, which featured Ronstadt on backing vocals. The buoyant melodic rock of ‘Go Back Home Again’ inexplicably failed to consolidate this success when released as the follow up single but it remains an album highlight. In contrast to the epic sweep of the first album the ballads on this selection are wistful and intimate, whether they are his own compositions (‘Passing Thing’, ‘Firefly’) or interpretations (Buddy Holly’s ‘Learning The Game’).

‘Never Let Her Slip Away’ is an unusual song, consisting of only synthesiser, percussion and saxophone, but it is a wonderful and utterly joyous piece of music that deservedly gave Andrew Gold a top ten UK hit and propelled its parent album All This And Heaven Too into the top forty. The album contained two further hits with ‘How Can This Be Love’ and another gem from the Andrew Gold songbook, ‘Thank You For Being A Friend’, which gained a second life when it was sung by Cynthia Fee and became the theme tune to the US sitcom ‘The Golden Girls’. Beyond the singles there is much to enjoy here including ‘Looking For My Love’ and the sumptuous ‘Genevieve’, on which Gold plays almost all the instruments himself.

Whirlwind was a rougher, more muscular album and although he was derided by some critics as a pop sentimentalist unconvincingly crying tough, the album was a move not dissimilar to the one made by Billy Joel on Glass Houses, motivated by changing musical trends and a desire not to be pigeonholed as a balladeer. It’s probably fair to say that it was not the album that the record buying public or his record company were expecting, however I have a special affection for Whirlwind: it was the first Andrew Gold album I ever heard and the excellent, punchy, power pop of tracks such as ‘Kiss This One Goodbye’ ‘Sooner Or Later’ and ‘Stranded On The Edge’ should not be readily discounted.

Disc 5 collates bonus studio material from across the four albums (highlights include a spirited original version of ‘Lonely Boy’ and the criminally overlooked ‘Gambler’) whilst a sixth disc is a treat with eighteen live tracks, seventeen of them previously unreleased, taken from shows at the Universal Amphitheatre in Los Angeles in 1977 and the New Victoria Theatre in London in 1976. The collection is rounded off by a lavish booklet and a DVD featuring six promotional videos, BBC footage from the New Victoria Theatre Show and an Old Grey Whistle Test feature from 1978.

Andrew Gold died tragically young, aged just 59, following a courageous three-year struggle with kidney cancer. His best-known hits have often featured on so-called ‘guilty pleasures’ compilations but he was so much more and deserves so much better than that. This excellent retrospective is a good starting point from which to explore the work of a gifted and instinctive musician, a fine songwriter and one of the genuine good guys of rock ‘n’ roll. 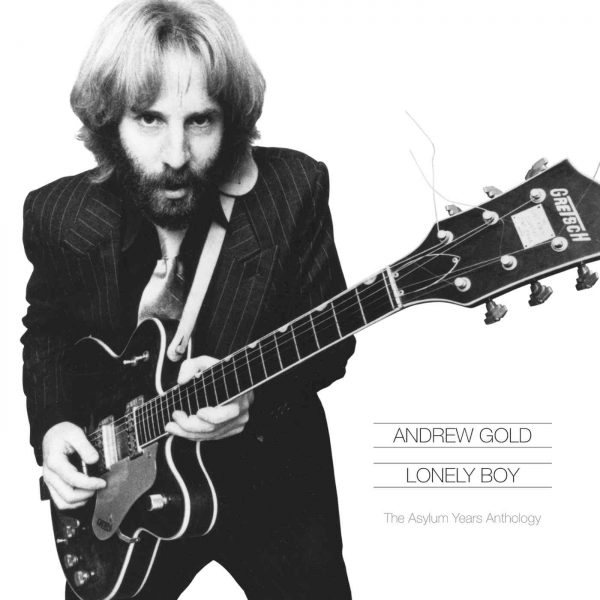