“It should be a good night tonight” remarked Danny Cavanagh not long after the start of Anathema’s set, “We had an argument before we came on, and that usually gets us going”. In which case I can only plead that the band have a proper bust up before every gig, because, this was an absolutely superb show.

The band set up this brief tour, seven dates in the UK and a further three in Holland and France, billed as ‘An Evening With Anathema’, and after having spent several months writing and preparing for their next album, the follow up to the mighty ‘Distant Satellites’, officially to road test some of the new material in front of an audience. This was in no way a play through of any new album though, the band were anxious to point out that most of the new songs were still works in progress, any titles announced were purely provisional, and it wasn‘t even certain that they’d make the final version of the album. We were also promised a full two hour show, with no support, but regardless, when the lights went down bang on 8.30, there wasn’t much room to spare on the floor of The Assembly.

After the intro tape, a piece of doom-laden electronica from the soundtrack of the film, ‘Mr Robot’, the band opened with one of the new songs, bearing the title ‘Gotyou To’, a very Radiohead-like piece, with a sparse arrangement by Anathema standards, and a vocal melody that seemed oddly separated from the instrumental backing. No doubt the finished piece will sound very different once the band work their magic in the studio, but if it seemed a slightly low key way to begin, everything clicked when they followed it with a superb reading of the emotional ‘Untouchable Parts One and Two’, featuring the first appearance of Lee Douglas on vocals, and an even better ‘Thin Air’, it looked as if we were in for a special night.

Although there was a lot of new material to take in, that didn’t mean the band neglected to play some favourites. ‘A Simple Mistake’ had a very gothic feel on the night, and after someone in the crowd complained that Lee was too low in the mix, Danny Cavanagh obligingly asked for her vocals to be turned up, and she responded with a breathtaking ‘Ariel’. Over the last few years, her role in the band has expanded, and she has truly risen to the challenge and become one of our very best singers.

Of the new songs, two in particular stood out. ‘Springfield’, with its roots in a sound check in the US town of the same name, hooked the crowd straightway. It’s already something of an epic, going through several moods before reaching a crescendo, and it got a very big reception at the end. If you’re the gambling kind, you might well consider a small investment on the nomination for Prog Magazine’s ‘Anthem of the Year 2017’ with this song in mind, or indeed the other highlight of the new material, ‘The Optimist’, which may well be the title of the new album, another epic, and its mood of optimism and reaching for better things seemed to catch the crowd’s imagination immediately. If you though the band reached their peak with the immaculate ‘Distant Satellites’, it looks as if they’re capable of producing something even better. 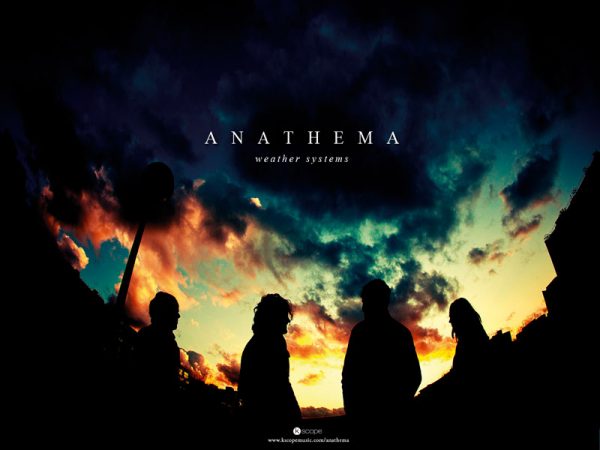 It seemed as if the main set ended with a storming ‘Closer’, but the band exited only momentarily, with ‘Firelight’ being played over the PA, before returning to take the gig to an even higher level with the title track from ‘Distant Satellites’, climaxing with Vinny Cavanagh joining John Douglas and Daniel Cardoso on a triple drum attack for the finale and followed by another new song, apparently with the working title ‘Bricks’, a more straight ahead rock song, but with that unmistakeable Anathema feel. Before ‘A Natural Disaster’, Danny paid a heartfelt tribute to Lee, telling how she’s grown from him first hearing her singing along to the radio in the kitchen to what he now describes as a world class singer, and I don’t think anyone present would disagree with that assessment on tonight’s showing, and when he asked the crowd to light up the hall with their phones, she justified all his kind words with a phenomenal version of the song.

For all that this was a show with a lot of unfamiliar material, it was nevertheless a memorable one. In this broad and diverse church we call ‘progressive rock’, I have Anathema, alongside Steven Wilson, at the top of a list of artists who can play what is often complex and sometimes challenging music and yet make a performance an emotional and uplifting experience. They really are something very special.

Anathema’s new album, whatever it’s called, should be out sometime in 2017