Yet another remarkable release from Birmingham’s finest

Anaal Nathrakh don’t make bad albums. They don’t make mediocre albums. And neither do they make good nor great albums. They make fucking incredible albums. And predictably, Desideratum is yet another remarkable release from Birmingham’s finest. Don’t waste your time reading this review – or any others for that matter. Just buy the fucking thing. For those who haven’t heeded my advice – who the hell am I to tell you what to do with your money? – and want something to back that up, here’s something to further waste your (and my) time with…

From the miasma of the deep and dark booming sound effects of opening instrumental ‘Acheronta Movebimus’ emerges a processed guitar riff. A crushing instrumental comprised of ridiculously heavy drums, planet-obliterating riffs, and trem-picked melodies heavier than some very heavy things in a lead box, a portent of what’s to come, Anaal Nathrakh’s destruction of all things once beautiful begins. V.I.T.R.I.O.L. enters the fray with ‘Unleash’, bringing with him the acidic bile of his biting vocals as well as his melodic, near-operatic clean vocals to shade the already opaque ever blacker.

Initially playing a more subordinate role in their recordings, the electronic elements that have been developing over Anaal Nathrakh’s last few albums have here been given a stronger position. Balanced with the brutality of the guitars and the vocals, the impact is devastating, its success lying in the fact that though obviously processed, they sound organic, alarmingly so. As technology comes to play an increasingly necessary and increasingly invasive role in the twenty first century, Anaal Nathrakh’s seamless blend of the cold barbarity displayed in their embrace of technology with the fallible and frail human element mirrors the despair of our inevitable demise as we blindly march ever onward into a future that is as much our foe as it is futile.

Garnering praise enough, ‘Idol’s been doing the rounds already, but with tracks such as ‘The One Thing Needful’ (with its sage advice seven seconds in), the extraordinary power and weight of the title track, the incessant barrage of ‘Sub Specie Aeterni (Of Maggots, And Humanity)…’, and the bleakly vicious closing track, as the next step in Anaal Nathrakh’s development – if indeed that was their intent – Desideratum is yet another incredible album from an incredible band. But you’ve wasted enough of my time already so just fuck off and buy it. 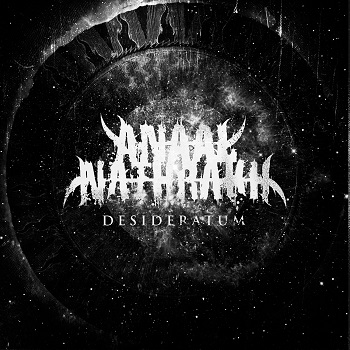