The air is biting, and the ground underfoot treacherous on this bitter winter evening. As Christmas rapidly approaches, London is alive with festivities. But for those wishing to avoid the overpriced German stollen at London Bridge Market and the incessant ‘it’s behind you’ cries echoing down from the West End theatres, there is something rather magical taking place at Scala this icy night.

Upon approaching the glitzy King’s Cross venue there is an extremely long queue stretching right down the street, full of quivering metalheads desperately jiggling around to try and stay warm. Eventually we are let in, ready to be visited by the three ghosts of devilish Christmas.

De Profundis are the first to take on and brave the freezing cold room, breath billowing out of them like a pack of Targaryen dragons. The guitarists rub their hands together vigorously, looking somewhat concerned. Will their fingers survive the night? But things soon warm up as these Londoner’s launch the evening into a heavy haze of speedy riffage with tracks from their brand new album The Corruption of Virtue. Death metal with a hint of groove – we kick off strongly.

We get our first glimpse of drummer Satoshi Fujinami, a 1980s Billy Idol lookalike with bleached hair standing to attention. Then enters Nozomu Wakai on guitar and backup vocals, dressed as Marilyn Manson on steroids – with a hint of zombie samurai. And lastly, looking like a devoted monk in a long flowing black gown and bushy black hair, frontman Mirai Kawashima graces us with his unholy presence.

We are sadly missing Dr. Mikannibal this evening (wife of Mirai), usually featuring on vocals and saxophone. Her lack of presence is felt (particular with the alto elements in certain tracks) but the night is no less spectacular.

This is Sigh’s first walk on UK soil for 12 years, and it’s much-welcomed – especially off the back of their recent release Shiki. They launch straight into the first track off the new album, ‘Kuroi Kage’. It’s a magnificently fierce song, the trance-inducing doom riff rings out demonically before exploding into theatrical, haunting moans, eventually joined by the raspy, exasperated voice of Kawashima.

It’s an avant-guard concoction of doom, opera and old-school black metal. It’s a true show, complete with a wielding of a sword and a live book burning. These guys don’t do things by halves. We are transported back to the band’s early years, with ‘Hail Horror Hail’ and ‘Shikigami’.

There are a few technical issues with the set tonight, particularly with Wakai who occasionally appears to be singing into a soundless mic and misses most of the final song as stagecrew valiantly attempt to fix an issue with his guitar. Despite this, Sigh pack an impressive punch, leaving us feeling like we’ve seen something very special, indeed. They end with a cover of Venom’s ‘Black Metal’, Kawashima declaring that England is the true home of extreme music.

Ending the night are a very emotional Anaal Nathrakh. Early on, frontman Dave Hunt pours his heart out to the crowd, elaborating on the difficulties the band has experienced during Covid and lockdown, and how their future was, and possibly still is, hanging in the balance.

He calls this evening his ‘experiment’ to see if anybody still cares about the band, whether it’s worth them continuing or calling it a day. This is magnified by the notable absence of Mick Kenney, the second half of the Brummie-duo. It’s not clear if his absence is permanent, but that his ‘focus has shifted’, as Dave explains.

Tonight, Dave is joined by two of the guys from Akercocke – again, it’s unclear whether they are permanent additions or stand-ins for Dave’s ‘experiment.’ Despite all this mystery and misery (Dave telling us that it’s time to stop with all this ‘touchy feely stuff’), the night is fiery, charged and hungry. If there was any doubt over fan devotion for Nathrakh, it is surely smashed to pieces tonight.

Playing several tracks from their most recent album Endarkenment (released in October 2020, but only just getting its live debut tonight) including the brutal attack that is ‘Libindous’, as well as old favourites ‘Forward!’ (which Dave tells us is Birmingham’s motto) and ‘Forging towards the sunset’ – the room is alive with fury and excitement.

Nathrakh’s first show in over three years, there is a sense of relief from both band and crowd alike – a need to appreciate this moment in the face of an uncertain future. Dave is a great frontman, even without his sidekick. He jokes that he’s not allowed to ask for stage divers, before giving us a suggestive wink.

He asks for a wall of death, which receives a tremendous response. He complains that he can’t read the setlist because he’s taped it upside down – but that he isn’t wearing his spectacles, so it probably doesn’t make a difference anyway. The room hangs on his every word. His charm is infectious, and performance as strong and brutal as ever. Fingers crossed it isn’t for the last time. 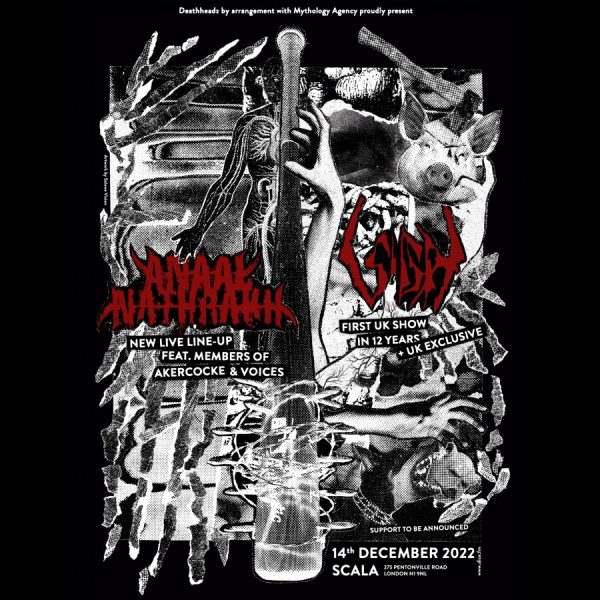