‘Trinity’ ‘Massive Addictive’ ‘Unreal’ and ‘Skyline’ are all destined to become fan favourites but for me nothing exemplifies the genre-mashing daring of Massive Addictive more than ‘Digital World’, one of Amaranthe’s strongest songs to date. Built on a pounding, electronic four-on-the-floor dance beat and propelled by a surging metallic riff that drops in and out of the song, the verses feature processed harsh vocals, a delightful tilt of the hat to Lady Ga Ga from Elize with Jake E providing the melodic counterpoint en route to a huge chorus. And then, just past the two minute mark, it all falls away as Henrik Englund screams “Start a revolution now!” and the track heads into an Amaranthe-style dubstep breakdown! This song is just begging to be played live and you can almost see people going mental in the mosh pit to this one.

The addition of Henrik Englund (Scarpoint) as the band’s new harsh vocalist is a smart move and he is a major player on this album, stealing the limelight on ‘An Ordinary Abnormality’ – a blisteringly fast track in which the Amaranthe engine room of Morten Sorensen and Johan Andreassen blow a collective gasket. Jake E and Elize Ryd both excel in their lead vocal roles throughout this album and provide some subtle, unexpected touches to the harmonies (listen for Elize Ryd’s ethereal siren call behind the harsh vocals on ‘Danger Zone’ for example) whilst Olof Morck’s glorious power metal riffs are here in abundance.  ‘Over And Done’, one of two ballads on the album, is perhaps the natural successor to ‘Amaranthine’ and should have a crossover appeal whilst album closer ‘Exhale’ takes a surprising step towards the symphonic metal territory occupied by the likes of Delain.

Personally, I loved The Nexus and I didn’t think the band would be able to top that, but with Massive Addictive I think they have. The album will undoubtedly infuriate purists on both sides of the pop/metal divide but Amaranthe fans – and I count myself in that number – will find much to love here. 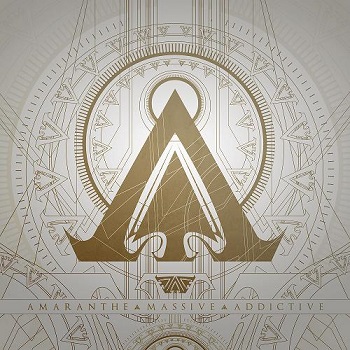