It is fairly common for band members to go off and work on their own offspring projects. It is less often, however, that it is drummers who do so; the first obvious names springing to mind being Mike Portnoy, Dave Grohl and Phil Collins. Another drummer to add to this list is Jeff Plate of Savatage and ex Metal Church. After thirty years work on and off on this project, 2021 marked its release: the debut album of Alta Reign, ‘Mother’s Day’, was finally out early this year.

Jeff is also known for being part of the Trans-Siberian Orchestra (TSO), a platform for many top musicians from the present heavy metal stage; to name a few: Jeff Hoekstra of Whitesnake, Russell Allen of Symphony X and Adrenaline Mob, Jeff Scott Soto, Dino Jelusić, etc. etc. A few of them have joined forces with Plate in his solo effort: guitarists Jeff Hoekstra and Chris Caffery as well as keyboardist Jane Mangini.

All this background information is more than plenty to guarantee curiosity and interest in what Jeff Plate has to offer – which is a lot. This is a very good album, intriguing to listen to and managing to grow on you the more you spin it.

In an effort to try and characterise Plate’s work in terms of genre, it could be said that this is a fairly good example of melodic metal with elements of progressive and power metal. It boasts plenty of harmonies, multi vocal choruses, lots of keyboard work and soaring guitar riffs. In terms of influences, strangely enough, Savatage wouldn’t necessarily pop up; there seems to be more influence here by Dream Theater than anything else, yet the album still remains quite unique in how it is composed and delivered.

From the word go, it is clear what to expect from this project, with straight to the point bombastic intro, promptly followed by multi layered vocals, ample keyboards and good guitar riffs. Half way through, a seriously good instrumental in Dream Theater’s best showing off traditions will make it evident that the album’s mastermind means business. And this is how the cookie crumbles from then on.

The tracks can be grouped into instrument-led and voice-lead. Unlike most power and progressive metal bands where the main singers take the lead with aggressive, clear vocals, Alta Reign doesn’t necessarily follow this pattern. In some songs, it is tempting to wonder if Tommy Cook’s potential is up to the task, having taken the back seat in favour of choruses, but, eventually, he does get to show his talent in songs that are primarily lead vocals led (‘Never Say Never’, ‘Witness’; ‘Come Out and Play’, ‘Immortal’, ‘Always’). The latter is an amazing ballad showcasing Cook’s strengths and his potential to make it into the Hall of Fame.

Generally, the album doesn’t follow a particular structure; its style floats from one mood to another. Particularly strong are songs with more aggressive, recitative vocals breaking up the rhythm, like ‘Witness’, and particularly ‘Come Out and Play’ with its raw edge. ‘Thin Red Line’ displays a solid metal start, headbanging beat and riffs, and the distant vocals help keep focus on the heavy rhythm rather than the vocal line. There isn’t much chance of stopping to catch your breath, other than in ‘Always’ and the beautiful but brief instrumental ‘Passage’.

The tracks that stand out most are the title song (bombastic intro and making the most of Hoekstra’s amazing riffs), ‘Immortal’ (where Cook takes over and showcases his mellow voice, in interesting contrast with the generally heavy music, much like you’ll have heard it in Ghost), ‘Let’s Go (I’m In Charge Now)’ with energetic multi vocals and some quirky solos (think Dream Theater).

A track worth a special mention is ‘Rise’. Starting strong and powerful with a complicated intro (Dream Theater springing to mind again), it changes pace into a lyrical slow section, and a pronounced role is dedicated to choruses. You won’t be disappointed by the fast guitar solo and the aggressive, emotional vocals sounding much like Klaus Maine’s classics.

Personal favourites would have to be ‘Never Say Never’ with its strong, catchy melody line, great guitar work (both as an underlay and in a soaring solo) and its epic ending, as well as the tender ballad ‘Always’ with its beautiful piano, not just in the lyrical intro, but underlying the whole song.

We will be talking to Jeff soon, so stay tuned for more information coming from him first hand. 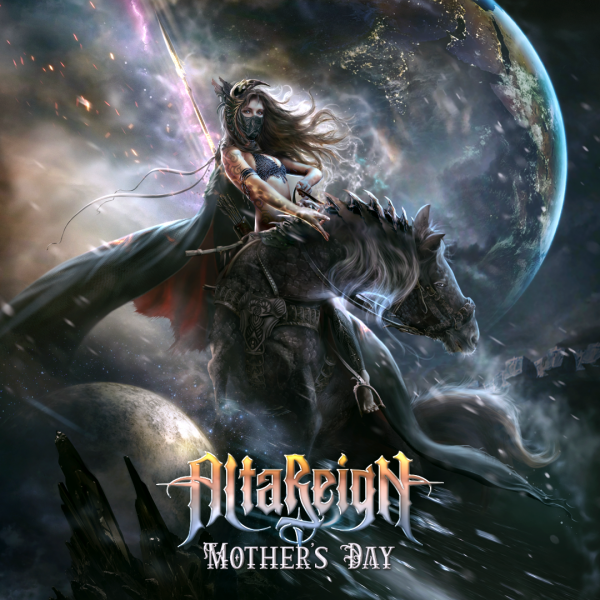