In marking them out as a bunch technically adroit musicians with a distinct ability to balance that with songcraft, 2010’s Fragments Of Form And Function, the first full length from Allegaeon, served the band well. A show of force and brutality laced with as much groove as it was with thought-provoking lyrics, it was bettered – a challenge in itself – by their follow up, 2012’s Formshifter (reviewed here). With that album, the balance between the needs of the songs remained balanced with their abilities to the point that even on the occasion when it sounded self-indulgent, it was still astounding. Two albums of such high quality into their career, where could they go next? Elements Of The Infinite is the answer.

Between Formshifter and this album, founder member guitarist Ryan Glisan has left the band to explore other avenues (though I suspect his band Pyrithion featuring wife-wanting-to-murder-er Tim Lambesis will be on hold for some time) and left guitarist Greg Burgess at the helm (see our recent interview with Burgess here). Where the loss of a key member usually means a significant change in the band’s sound, the only effect on Allegaeon is that they sound tighter, more coherent. As well as having Michael Stancel filling the vacant guitar spot, the band now has a permanent drummer with Brandon Park. While Stancel does an incredible job of slaughtering the strings alongside Burgess, Park is a death machine. Together with bassist Corey Archuleta – whose presence is this time felt all the more forcefully because of Dave Otero’s sterling production work – and vocalist Ezra Haynes, Allegaeon sound like a band that knows exactly what it wants to say and exactly how to get that message across in as succinctly and in as tightly focussed a manner as possible.

Songs? The album starts impressively, the sinister acoustic intro to ‘Threshold Of Perception’ is fortified by cinematic orchestration, grand without being ostentatious, it sets the tone for the assault that follows. The band delivers their usual array of impossible riffs, savage hooks, intelligent lyrics, and skull-crushing brutality in ten tracks of subtle complexity and intricate design. By the time ‘1.618’ comes along, it’s apparent that Allegaeon’s momentum has not been hindered by their line-up changes, but bettered for it. With Elements Of The Infinite, all that we’ve come to expect from the band is here, and more than a few surprises. One need only give the almost thirteen-minute closing track ‘Genocide For Praise – Vals For The Vintruvian Man’ a listen to hear that Allegaeon have a serious problem on their hands: where do they go next? 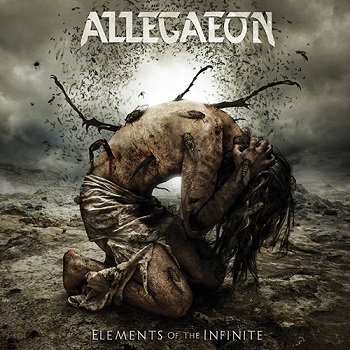