To call Alcatrazz a supergroup would be something of an understatement, but no other word will suffice. During their original tenure (1983-1987) they revolved around the core line-up of Graham Bonnet (Rainbow, MSG), Jan Uvena (Alice Cooper) plus Gary Shea and Jimmy Waldo (both Vinnie Vincent Invasion) whilst legendary guitarists Yngwie Malmsteen, Steve Vai and Danny Johnson all passed through transiently. However, for all their pedigree Alcatrazz never made commercial inroads but they produced some of the ‘80s best music and if you need proof, it’s all here in this two-disc set.

Originally released in 1998 The Best Of Alcatrazz was culled from the band’s first three studio albums and the Live Sentence outing. A trio of tracks from their 1983 debut (and best) album, No Parole From Rock ‘N’ Roll kick things off in fine style and those with a penchant for hard, yet melodic, rock will find a spiritual home here and especially in the hook laden ‘Island In The Sun’. A young Yngwie sounds quite restrained and shows none of the technical complexity that would clutter his career and gets his head down to deliver a solid riff over which Bonnet’s powerful vocals float majestically. It’s with the following ‘General Hospital’ and ‘Hiroshima Mon Amour’ that things really hit their stride and hints at what Rainbow could have become had Graham stayed in their ranks.

Released just a few months after their debut Live Sentence was the first time many had heard Malmsteen in live environment and he tears up the rule book with ‘All Night Long’ and ‘Since You’ve Been Gone’ and, even here, it’s evident he was destined for a star-studded solo career. By the time 1985’s Disturbing The Peace rolled round Steve Vai had taken over the six string and he certainly revitalised the group. His guitar tone is unmistakable and in tracks like ‘Stripper’ and ‘Painted Lover’ you can hear the genesis of what would become David Lee Roth’s crowning glory, Eat ‘Em And Smile.

Another year, another guitarist and 1986 saw the arrival of Danny Johnson (Alice Cooper) for the release of Dangerous Games. The lack of Billboard Hot 100 action saw the Capitol Records lobbying for a more radio friendly offering and their paw prints are all over Dangerous Games. A cover of The Animals’ ‘It’s My Life’ promised much but the remaining selections, while not bad, are the sound of a band running out of steam. Far from being “dangerous” these four cuts have been over-produced, buffed to a super smooth sheen which is at the expense of their rough-hewn charm. Nevertheless, Alcatrazz could still conjure magical moments such as ‘Undercover’ to ensure that this disc is, indeed, The Best Of Alcatrazz.

Disc Two: Live In The USA (plus unreleased tracks)

Recorded in 1983 and featuring Alcatrazz in their first incarnation Live In The USA captures the band at their raw and visceral best. This set finds the group on stage at, rather strangely, 1pm and is devoid of overdubs or any kind of tinkering for a truly live experience. The mix places Jan Uvena’s drums and Jimmy Waldo’s keyboards centre stage to ensure opener ‘Too Young To Die, Too Drunk To Live’ is a real chest thumper. Turbo charged with plutonium grade fuel ‘Jet To Jet’ races from speaker to speaker and it proves to be a white knuckle ride. A cover of ‘Desert Song’ (Michael Schenker Group) sounds absolutely massive while ‘Kree Nakoorie’ injects a change of pace and makes Live In The USA ululate like a fire breathing dragon.

Live In The USA finds Yngwie throwing off the shackles and throughout his playing is exceptional and no more so than on ‘Coming Bach’. The perfect vehicle to showcase his skills it’s an instrumental which finds him all over the fretboard like a rash and pulling some impossible sounds from the depths of his Marshall stack. Far from your stereotypical metal frontman Graham Bonnet delivers his offbeat stage raps and, despite being together for a relatively short period, the band lock in tightly. At this stage in their career the band had only released one studio album so cover versions feature heavily in this set including two from Rainbow; ‘Since You’ve Been Gone’ and set closer, a frisky run through of ‘Lost In Hollywood’.

Bolstering this disc are five bonus tracks from the band’s mark III era. Danny Johnson’s guitar work on Dangerous Games didn’t really do him justice but he makes amends on ‘Glass Mountain’. Lighting up the sky with his pyrotechnics Danny let’s fly and makes this, and a cover of Lizzy Borden’s ‘Red Rum’, brutally heavy. The three unreleased tracks are instrumental demos performed by Danny and Jimmy Waldo. More for completists they, nevertheless, offer an intriguing insight into Alcatrazz’s inner workings.

This double disc set will delight Alcatrazz fans and will also make the perfect introduction for those yet to make their acquaintance.

Disc Two: Live In The USA 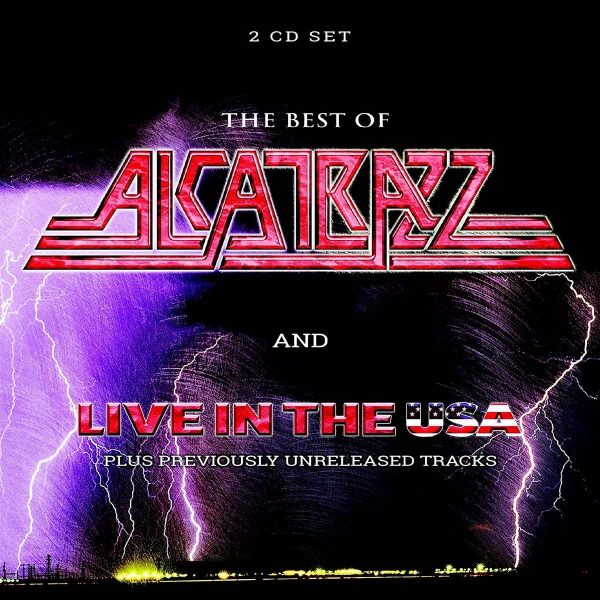