Frontiers Music Srl is proud to announce the release of the upcoming new studio album, “From The New World” by the legendary Alan Parsons. The eleven-time Grammy nominated legendary music icon and master of progressive rock released his last studio album “The Secret” in April 2019. “From The New World” touches on the classics sounds Parsons has become known for in his impressive career, with progressive, symphonic, and classic rock elements all touched upon on this stunning album. Guest appearances from the likes of renowned guitarist and singer Joe Bonamassa, Tommy Shaw of Styx, vocalist David Pack (Ambrosia), and vocalist James Durbin add wonderful touches to the stunning performances by Alan and his incredible backing band.

“From The New World” follows Alan’s 2019 album, “The Secret”, which, at the time, had been his first new studio album in 15 years. Alan’s longtime hobby has been performing magic and that album showcased his own passion for the craft, hence the title “The Secret.” The album saw a return to the pop rock sound with symphonic and progressive rock interludes which the Alan Parsons Project was known for.

Alan Parsons’ career started when he was 18 years old and earned his first album credit on the Beatles “Abbey Road”, an album recorded in the legendary London studios of the same name. He soon became a well respected studio engineer, working for Paul McCartney, John Miles, The Hollies, Al Stewart, and Pink Floyd, among others. He is particularly renowned for his work on the Pink Floyd masterpiece “The Dark Side of The Moon”. Recorded in 1973, Parsons experimented with many of the most advanced recording techniques of the time, showcasing his forward thinking approach. As well as receiving gold and platinum awards from several countries, Parsons has received ten Grammy Award nominations for his engineering and production work. In 2007, he was nominated for Best Surround Sound Album for his most recent release “A Valid Path”. In 1975, Alan formed The Alan Parsons Project along with producer and songwriter (and occasional singer) Eric Woolfson. The Project consisted of a group of studio musicians and vocalists, often involving the members of two bands Alan had produced: Pilot (Ian Bairnson, Stuart Tosh, and David Paton) and (on the first album) Ambrosia. The Alan Parsons Project released ten acclaimed studio albums, but rarely performed live, even after several US and UK Top 20 hits. The Project ended at the end of the 80’s.

Since then, Alan has released four albums under his own name, often featuring musicians that also appeared on the Project releases. In 1994, he started touring regularly as The Alan Parsons Live Project. In 2019, Alan returned with an acclaimed new studio album, his first in 15 years, entitled “The Secret”. The album was followed by a comprehensive world tour which saw Alan and his band perform new songs together with classic tracks from his catalog. Additionally, Alan was awarded the OBE (Order Of The British Empire) at the Queen’s Birthday Honours in June 2021.

“From The New World” Tracklisting: 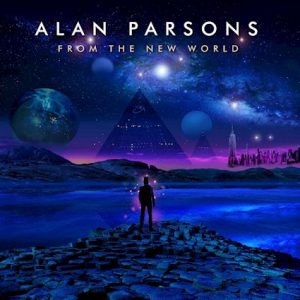