Before we tackle the emotional heft of this majestic album, let’s fill in a bit of background info. You may not have heard of Alain Johannes but you’ll almost certainly have heard his work. In 1990 he formed Eleven, with his wife Natasha Shneider and drummer Jack Irons (RHCP, Pearl Jam). Johannes and Schneider also co-wrote and played on Chris Cornell’s brilliant solo debut album, ‘Euphoria Morning’.

And let’s not forget his work with QOTSA, PJ Harvey, Them Crooked Vultures and his regular gig producing and playing with the ever brilliant Mark Lanegan. And that’s only the biggest names. Quite a quality CV right there.

And then, in 2008, Johannes’ world started to implode. Shneider died of cancer. Johannes continued to produce his usual quality work. Then came the tragic death of Cornell. Finally, last year, Johannes himself was taken out of action by pneumonia and double bronchitis. While recovering and reflecting, he wrote and recorded ‘Hum’ over the course of 12 days. Rehabilitation. Catharsis. Rebirth – ‘Hum’ is all of this.

The overall setting for these songs is acoustic. If you’ve watched the above video you’ll probably hear the influence of Richard Thompson and Nick Drake. World music plays a part too. Johannes is part Chilean and Southern American vibes are definitely part of the mix here – pan pipes may even appear in ‘Here In The Silence’. Backing vocals are subtly deployed – quite often wordless – chanting, droning, adding an underpinning of dark, ominous hues. There is a definite Indian influence to some of it, of the Qawwali devotional vocals of the great Nusrat Fateh Ali Khan – which all makes sense, all ties in. ‘Euphoria Morning’ was partly an emotional reaction to the death of Jeff Buckley, who idolised Nusrat, once referring to him as “my Elvis”.

Indeed, it feels like a companion piece to Cornell’s debut. The same melodies and vocal inflections are here. Having always assumed that Zeppish melancholy came from Cornell, it shows how crucial Johannes was in creating that album. And it’s also no offense to Johannes, whose vocals throughout are nothing short of subtly heartbreaking, but one can only dream of how Cornell would have torn into these songs, it would have been a very different creature.

But let’s celebrate what we have here. A wrought, quiet beauty lives within this gatefold sleeve. We start gently, almost drone-like. A well travelled Nick Drake. By the time we reach ‘Hallowed Bones’ it becomes a tad more urgent, there’s a distinct late period Leonard Cohen feel. Darkness (and shades of prime acoustic Zep) encroaches, a small, jet black choir adds a Middle Eastern feel to the gothic acoustica.

The tones are burnished, a setting sun shines on Johannes guitar strings. George Harrison is discreetly added to the fray. Ukes and mandolins appear in the background. And then…amplification. A wall of crackling feedback backs the  throbbing acoustic heartbeat of ‘If Morning Comes’. It’s a very gentle primal scream – Johannes wails in catharsis. The Beatles, Zep and Nusrat all return for this scorchingly powerful centrepiece. Damaged but unbowed and torn asunder by a howling muezzin guitar solo, it’s majestic, noble and, as I scribbled while listening to it for the first time, mag-fucking-nificent.

‘Free’ is a song about moving forward, “I follow the desert wind”. It chimes, echoes, breathes slowly and calmly. Again, the backing vocals add such distinct power to these introspective, haunting melodies. Power without electricity. There are, having said that, occasional electronic beats, possibly a nod to Lanegan? Johannes’ voice, singing with such human vulnerability over the clinical, mechanical backing becoming all the more moving.

‘Sealed’ is another stand out track. Guitars thrum, rattle and insinuate. It’s another dirge (a frequent technique), rolling onwards. A road gang song – it pummels and pounds the sun-baked earth, shouldering a heavy burden as it lurches on. Another squalling, anguished electric solo appears – the distorted howl of a wounded soul. Kudos to guitar-hero-hat-wearing Johannes, his musicianship throughout is impeccable yet largely unshowy.

And it ends, appropriately enough, with ‘Finis’. Played on a Sustainer guitar and sung directly to his beloved late wife, he vows to carry on, to continue making music, however painful that may be. “All that we started, I’ll see to the end”.

So there we are. An album borne of a period of loss, illness and spiritual rebirth. It’s a quietly emotional ride and a no brainer for anyone who’s a fan of any of the names he’s worked with. It rocks without the aid of (many) amplifiers or leather accoutrements and it will undoubtable appear on my ‘best of the year’ list. It’s a sacred thing.

Released on 31 July 2020 by Ipecac Recordings 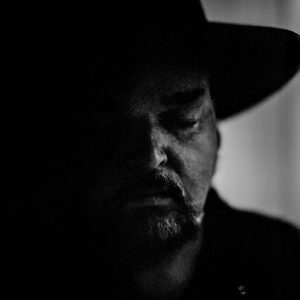