Oh, to be young in the 70’s. The heady aroma of patchouli in the air, cheesecloth shirts, free love, earnest bedsit discussions about the issues of the day and, at all times, an album tucked under your arm – there were several favourites, and any combination of them was acceptable. ‘Dark Side of the Moon’, obvs, ‘Solid Air’ was always a safe bet, as was ‘Year Of The Cat’, the perennial classic from Scottish folkie, Al Stewart.

This soft rock, Radio 2 friendly album is now the subject of an exhaustive, 4 disc reissue from Cherry Red Records. We get the original album, remastered and given an audio overhaul, a DVD 5.1 surround sound mix and a 2-disc concert from 1976. Oh yeah, and a lavishly illustrated 68 page booklet. Far out.

What is there left to say about the original album? Produced by Alan Parsons, it was a classic of it’s type, almost defining the intelligent soft rock genre. Stewart’s songs always had a fictional or historical narrative, coming as he did from the folk tradition, he was a teller of tales. Right off the bat we are into that territory – opening track ‘Lord Grenville’ tells the story of, erm, Sir Richard Grenville, the famous English sailor. And the sound, mellow, acoustic based, an exemplar of that archetypal 70’s soft rock sound – how did they get that slightly muffled, relaxing rhythm section sound back them? Perhaps the same stoned bass player and drummer played on, like, everything.

The musicianship on the album is simply stellar, from the touches of flamenco guitar on ‘On The Border’ to the smooth jazz of ‘Midas Shadow’, it’s note perfect. There’s no showboating, the musicians are always at the service of the song, any solos are calmly, coolly delivered and Stewarts voice – light, easy on the ear, knowing, an old mate telling you a story over a pint of real ale, a hint of lazy playfulness in there, as if about to slip in a witty aside. The kind of singing voice that doesn’t even sound like a singing voice. He’s just talking, I could do that, you think to yourself…right up until the point where you actually try it.

‘Flying Sorcery’ has, as well as a painfully bad pun in it’s title, harmonica and pedal steel, delicate touches of Americana. There are also extremely subtle, almost blink-and-you’ll-miss-them echoes of Prog. In the quiet complexity of ‘Broadway Hotel’, the willowy atmospherics and Gilmour-isms of the guitar work in ‘One Stage Before’, it’s an album of hidden depths, unobtrusively loaded with much for those aforementioned bedsit dwellers to discuss late into the night.

And then we come to the title track. It’s Stewarts masterwork, his pension plan, his ‘Baker Street’ (which, coincidentally, is by another Caledonian folkie). Originally written about tragic English comedy genius Tony Hancock, Stewart completely rewrote the lyrics (something he often did, occasionally writing several sets of lyrics for tunes) at the behest of American record execs who pointed out that their album buying, cash weilding public would have not a Scooby Doo who Hancock was. Stewart replaced the original lyrics with quasi-cryptic mysticism. What did it all mean, man? Who is “she”? There were expertly placed strings, beautiful solos and, as the song approached is epic crescendo, a (obligatory in the 70’s) sax solo – again bringing ‘Baker Street’ to mind. It’s a potted archetype of the sensitive singer/songwriter classic, it’s all there. Plus, the keyboard players name was Don Lobster. I mean, what more could you want?

A live album is the answer, and that’s here too. Culled from the Seattle stop of his 1976 tour, this 2 disc find is a gem. The production is warm and clear, highlighting how good Stewart and his band were, effortlessly recreating the sound and feel of the (then) new album. The only difference between the album and the concert is a few concessions towards the demands and excesses of 70’s big budget tours, namely, solos.

Lot’s of them, all over the shop! You notice it from the off, the guitars are just a tad more to the forefront, a wee bit rowdier, the solos more regular, and longer…much longer. Stewarts folkier songs move up a league into folk rock. Versions of the YOTC tracks, however, are solid, note perfect. None of the melody and subtlety is lost to bombast.

Mid-concert is where things really begin to stretch out – a sure nod to the Floyd’s and Zep’s then rampaging their way around the States. ‘Roads To Moscow’ draws out every drop of drama and tension from the material while ‘Nostradamus’ becomes a 9 minute centrepiece – a wonderful mixture of acoustic and electric, a distant cousin of Page’s ‘Black Mountain Side’, full of FX laden, Middle Eastern influenced acoustic virtuosity – Bert Jansch inspired folk taking on the structures of it’s bigger, louder, stadium-filling rock cousins. Plus there are bongos!

And on it goes, taking in the blues, namechecking the movers and shakers of the time (Churchill, Keeler, Ginsberg, Hendrix) while asking “which way did the 60’s go?”. We get ‘Year Of The Cat’, described by Stewart as “a North African love song” and the rocking, guitar-centric finale of ‘Carol’.

For fans of Stewart and this album, this is a no-brainer. Devoid of anything even approaching a duff track, performed by a group of intuitive and precision-drilled musicians at the very top of their game. Beautifully packaged, remastered and put together, this is a sumptuous set, lovingly put together for an album that deserves nothing less. 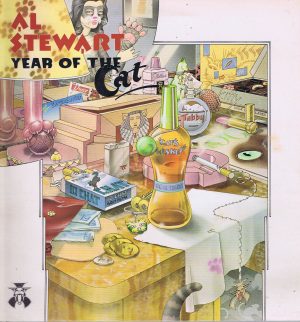