Originally formed in 1983 Al Ross & The Planets soon evolved from a covers band into something wholly original and by the early ‘90s they had gained a reputation as the live band on the London circuit. A hiatus curtailed their momentum somewhat but they’re very much back, and with what’s sure to be a breakthrough album, the kaleidoscopic Blue Crystal.

Beginning in rather sedate fashion opening track ‘Crossroads’, like a tumbleweed rolling across a desert plain, soon takes shape and utilises the full dynamic range to become absolutely humongous. The introduction of choral voices only adds to the monolithic feel and creates a rich and luxurious sound. That ‘Crossroads’ (and Blue Crystal) sounds so silky smooth shouldn’t come as a surprise as it was recorded at London’s famed Abbey Road studios and producer Marc Rapson has done a great job in creating a warm and textured sound. Wrapping the listener up in autumnal hues ‘Crossroads’ is the type of song you’d wish would continue for perpetuity but all good things must come to an end and ‘Crossroads’ makes a soft landing after its dizzying flight (one of two quieter passages that bookend the song) but, nevertheless, it’ll continue crawling around your cranium for several days.

The ambience of Abbey Road seems to have rubbed off on Al Ross & The Planets and the eight tracks which comprise Blue Crystal come liberally soaked in melody and ‘Something Changed My Mind’ arrives with a confident swagger and is garnished with jazzy keys. In fact, the whole album sounds like a band comfortable in their own skin and they lock in tightly to ensure this record flows as if a river of warm chocolate. Like waves lapping a shore ‘Faith’ gently ululates and is the musical equivalent of a soothing balm that’s sent to soothe our troubled times. ‘Blue Crystal’ is a worthy title track that bursts into the light from beneath water and it’s the type of song you’d expect from the pen of Bernie Taupin. With shades of The Beatles it’s a haunting track that has an other-worldly quality and seems to exist in that magical moment between wake and sleep.

Pulling all the various strands of The Planets into a cohesive whole ‘In The Middle Of The Night’ is awash with Hammond organ and bluesy guitar and is supplemented by some sublime harmonies which give an almost gospel feel. Overall, Blue Crystal has a nocturnal ambience; it conjures images of rain-soaked, neon-lit cityscapes and ‘All The Things We Started’ is just the type of song you’d expect to emit from a late night jazz bar. ‘Checkin’ Out The Vibe’ picks up the pace and gives the band a chance to let fly and sets things up nicely for closer ‘Sweet Memories Of You’. With a haunting refrain and ethereal female vocals it reminds me of Floyd’s ‘The Great Gig In The Sky’ (that Abbey Road influence again?) but, either way, it’s a fine example of prog influenced rock and, as the song slowly fades to black, ensures Blue Crystal ends on a rather ominous tone.

Al Ross & The Planets could be considered late bloomers but they’ve certainly hit a purple patch. Continuing the good work of their debut album (2017’s The Planets One) their sophomore release, Blue Crystal,could be the one that propels them into the uncharted stratospheric heights. 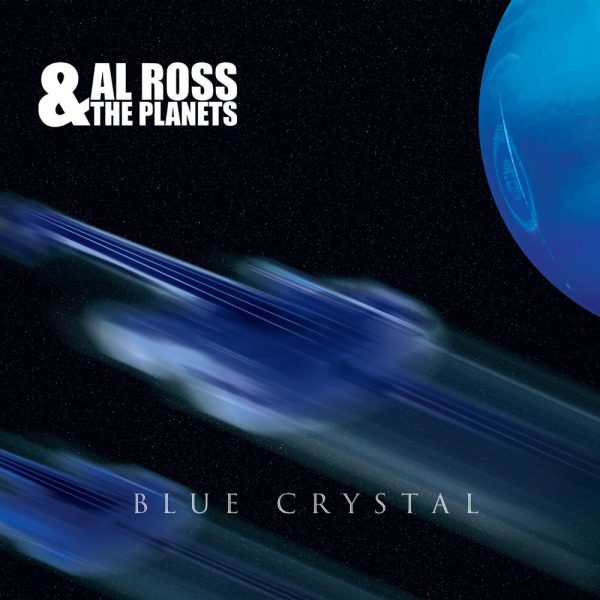