Oh dear… Where were you all? That was the question on the lips of the hardy few who turned up at Scruffys on a blustery rainy midweek evening for a tantalising triumvirate of twisted talent.

Headliners Aghast had endured a trying trip up the motorway and the Londoners could be forgiven if the sight of a pitifully poor turnout took the wind from their sails. So it’s to their credit that they performed with such enthusiasm filling the small city centre haunt with their demonstrative hardcore kicks.

Good spirited, big hearted and with an easy manner whereby they refused to take anything too seriously, Aghast crashed their way through a set in the style of a pinball machine being pushed to its limits.

Singer James stomped around the stage with such carefree abandon that he even suffered a blow to the chops from the neck of a neighbouring guitar towards the end of their set.

On ‘Mouthbreather’ Aghast slowed things marginally but the material from forthcoming EP ‘Something Else, Something Rotten’ was essentially a three-song ram-raid in which James screamed and hollered on the top of a frenzied rhythm section intermittently blown sideways by some blastbeats.

The Birmingham underground scene is wonderfully vibrant at the moment and it was great to see two of its finest  provide the support at Scruffys.

First of these was the youthful Conjurer, quite rightly in good spirits, having just been signed up by Holy Roar Records. It’s testament to their talent and tenacity that Conjurer have come a long way in a short time.

The secret, as usual, is sheer determination and hard graft. Last year they clocked up more miles than your average club runner taking on board any gigs that they were offered.

Such admirable commitment has seen them steadily expand their fan-base from beyond their native Midlands to all points north and south. At Scruffys their upwards spiral was easy to comprehend as they delivered an immensely powerful set, tighter than the lid on a jam jar.

Main vocalist Dan flicks the switch between earthy primal barbs and piercing cries while all around a thick portion of sludge sucks the air from the room. At times the vocals are shared by guitarist Brady and acting as a kind of meaty dividing wall is bassist Andy who doesn’t so much as play his four-stringed companion as wrestle it into submission.

At times this man v machine contest spilled off the tiny Scruffys platform onto the main floor almost as a sideshow as Conjurer threw their spells around the room with the relish of a Hogwarts’ new boy.

While Conjurer at times threaten full-on obliteration, there is ample melody within the lines albeit coated with mystery and menace. Catch them back in Birmingham at the Rainbow on May 13 when they perform alongside such illustrious visitors as Oathbreaker and Opium Lord.

While Conjurer are a welcome new addition to the Second City’s underground scene, Absolution is a name etched across the memory of anyone who’s followed the local death metal scene for the last couple of decades.

Absolution may have been dormant for some of those 20 years but in more recent times they’ve been back together, now performing with a new man behind the drum-kit.

The five-piece released a new EP, ‘Temptations of the Flesh’, at the tail end of last year. For anyone in any doubt as to where these guys’ hearts lie it didn’t take long for the truth to emerge during their cranium-crushing Scruffys set.

Generating more hostility than a Blues/Villa derby, Absolution fill the air with sick stomach wretching songs most, if not all, centred around notorious serial killers – and I don’t mind Tony the Tiger.

Magnificently bearded frontman Neil took advantage of the less than packed floor to conduct his savage sermons from there, shouting directly into the faces of those brave enough to go toe-to-toe with him like a sergeant barking at new squaddies during drill practice.

Very much in the Cannibal Corpse/Suffocation camp, even Absolution’s ballads – Love Sick Mind – paid homage to another warped and sinister killer. They may not be the first band to pen a number about Ian Brady and Myra Hindley but their own take on the Moors’ murderers was probably as ferocious as any.

A superb cover of Celtic Frost’s ‘Dethroned Emperor’ was followed by closing track ‘Dr Death, this one about the notorious Mancunian GP Harold Shipman who unfortunately killed more than he cured.

For more history lessons on the nation’s best loved serial killers be sure to catch Absolution at The Dirty Dozen Charity All-Dayer at Rock Zombie in Dudley on March 5. 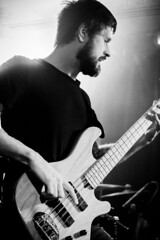 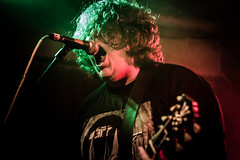 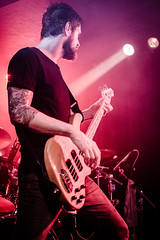 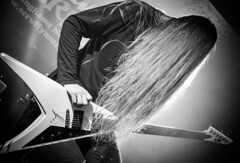 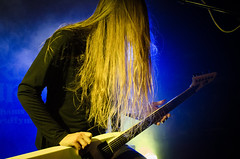 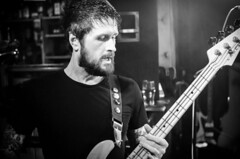 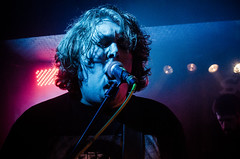 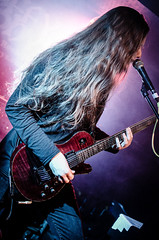 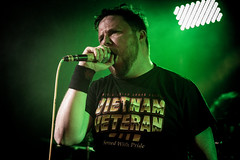 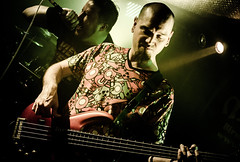 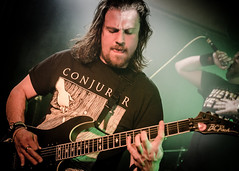 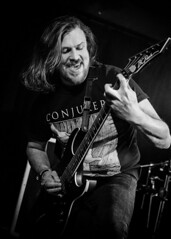 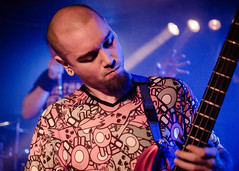 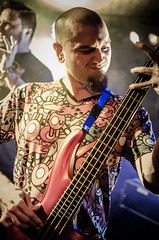 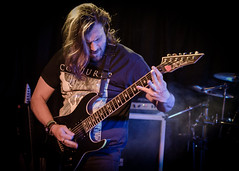 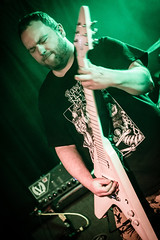 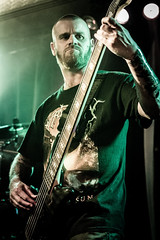 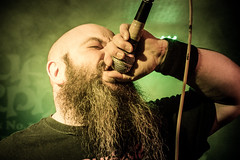 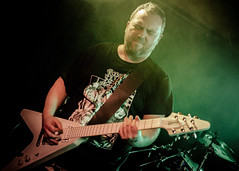 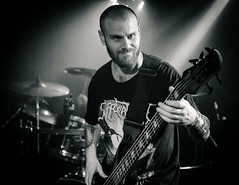 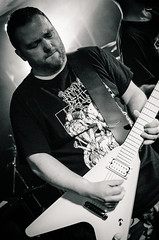 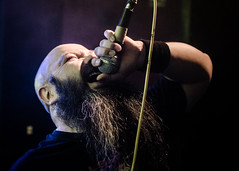 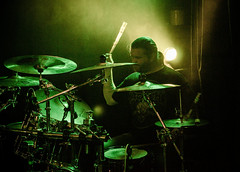 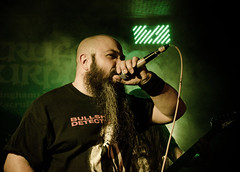 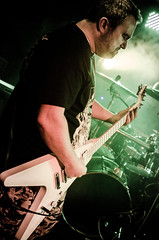 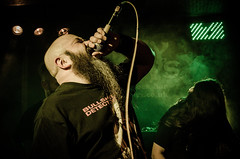 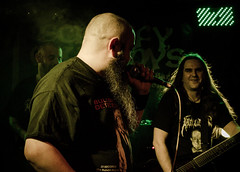