Dangerously close to self parody but still stunning…

Aerosmith is that rarity. A rock band saved by hip hop. That bold reinvention, collaborating with Run-DMC in 1986 relaunched the band into a stratospheric orbit, turning them into a twentieth century pop culture phenomenon. And do they play on that? Well yes, of course they do. Aerosmith gigs can fluctuate between pantomime, where convention abounds, everybody knows the plot and audience participation is absolutely compulsory; and genuine rock’n’roll, where cacophonous noise meets fragile melody and forms a mutually beneficial partnership.

And this “filmed in Hi-Def” gig in Donington 2014 (Download) is no different. As architects of some of rock’s greatest anthems – ‘Love In An Elevator’, ‘Cryin’, ‘I Don’t Want To Miss A Thing’ – they don’t have to work too hard to sound cool, and they have many more lightning bolts of brilliance to deploy. But too often perhaps, the curse of endless repetition neutralises the effect – as on juvenile romp, ‘Love In An Elevator’ and the clanging throwback, ‘Toys In The Attic’. Where these songs once blazed with the throaty roar of rock’n’roll, they now coast along along like soap operas.

That said, as always, Tyler’s flamboyance is colourfully accentuated by the other four’s pedestrian gait on stage. They all know that the music does the talking of course. And few songs talk louder or more convincingly than the effervescent dance floor filler, ‘Dude Looks Like A Lady’, or the stomping, blues-wailing ‘Same Old Song And Dance’ where Joe Perry’s riffs spar relentlessly with the rhythm section. Momentum gathers with ‘Walk This Way’ and ‘Home Tonight’, as the band torque up the tension, working their way toward an epic, triple encore crescendo, beginning with Tyler at the grand piano and ‘Dream on’, rapidly followed by a rather chaotic ‘Sweet Emotion’.

And as the band wanders up front, to the edge of the stage, it all gets dangerously close to self parody, but finally, emphatically, we get a stampeding, backs to the wall version of ‘Mama Kin’, and an already delirious crowd goes bananas. Aerosmith certainly know how to close a show. Anyone who was there and anyone who wasn’t should note that this DVD has been released in Dolby Digital Stereo and Surround Sound. Stunning. 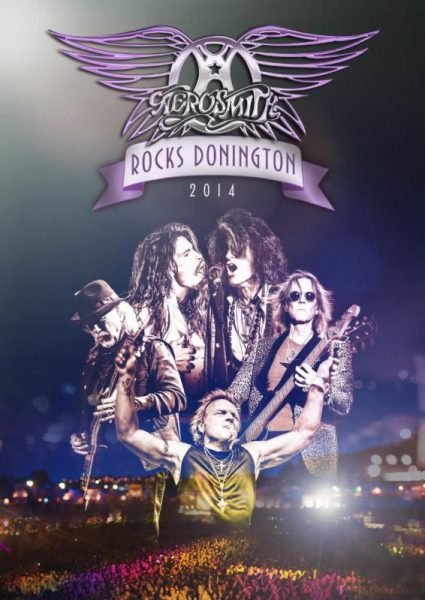