Aborted have been pushing the boundaries of extreme metal since their widely-acclaimed breakthrough, 2003’s Goremageddon. In 2011, they went further than ever before with Global Flatline and set the bar for gore/grind/death metal releases. Punishing throughout, the Belgians never let up for a second and lead single ‘The Origin Of Disease’ has become one of the most recognizable and well-loved pieces in the genre.

Fast-forward two years and Sven and co have delivered The Necrotic Manifesto, an unforgiving 43 minutes, broken down into fourteen, two to three minute servings of brutality. Avid fans of classic horror, Aborted have consistently sampled films such as Hellraiser and this offering doesn’t differ from this trend with opener ‘Six Feet Below Foreplay’. The first track proper, ‘The Extirpation Agenda’, is exactly what every Aborted fan wanted to hear: blasts, riffs and demonic vocals. First single/lyric video track ‘Coffin Upon Coffin’ displays some of the bands more colourful lyrical themes, ‘Into the dead I shove my meat’ is a definite highlight. What follows is pretty standard for the Belgians, with slightly improved production but really nothing that wasn’t brought by Global Flatline.

It’s quite easy to dismiss music as heavy as Aborted’s as just ‘more of the same’ standard extreme metal, but there’s something about this record that makes it really stand out. Sven is at the top of his game vocally, his delivery has never sounded so venomous and the aggression of the songs has really been ramped up: drummer Ken Bedene has probably never had to work so hard in his life. The musicianship throughout the album is impeccable, every note placed precisely so as to cause as much damage as possible. While not at their most raw, this is definitely the most potent Aborted have sounded in years.

Those already familiar with the deviant death dealers will be aware that they’re fairly consistent with their output, the only difference being in that the production gets slightly more polished on each opus. The Necrotic Manifesto hits the nail on the head (or into the coffin?) in that it’s the perfect blend of death, gore, grind and groove that all extreme metal fans can agree on. Let’s see them match it next time! 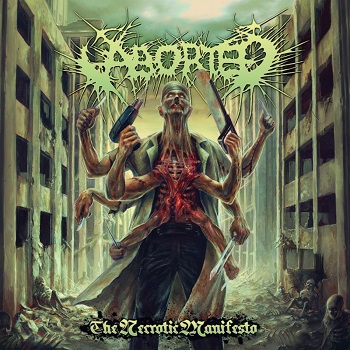