Maybe not rock as we know it, but as thrilling contemporary sounds go, this’ll do just fine…

In 2011, the Croatian classical music duo 2 Cellos defied commercial orthodoxy by recording a sparkling “re-imagining” of Michael Jackson’s ‘Smooth Criminal’. They uploaded the track to You Tube and it went viral. A contract with Sony Masterworks was the prize.

Celloverse rides in on the coattails of the the duo’s ensuing – and enormously popular – first two albums. Their trademark sound, an energising marriage of classical technique and hard rock dynamics, cleverly subverts expectation on the opening track, a mashup of the music of classic metallers, Iron Maiden and classic composer, Gioachinno Rossini. ‘The Trooper’ and ‘The William Tell Overture’ may seem like strange bedfellows but, and maybe this should be no surprise, the duo show a tutored ear for the finer points as well as a firm grasp of the essentials. Rossini’s magnum opus was the rock’n’roll of its day. Thanks to Iron Maiden and 2 Cellos, it is again.

Celloverse then goes on to open itself up to all manner of popular music cover versions. Classical music’s cultural shift into the middle classes probably accounts for the Mumford & Sons, Sting and Radiohead covers… ‘I Will Wait’, ‘Shape Of My Heart’ and ‘Street Spirit’. But they also give the duo the opportunity to show us an admirable refusal to play to the gallery. On these “slow movements” they quietly bring out the smouldering emotion in the original lyrical sentiments, without resorting to manipulative tugs at our heartstrings.

Blending orchestral forces with rock elements never succeeded as well as it does on ‘Thunderstruck’. AC/DC, the archetypal working class heroes of rock’n’roll, are infamous for making a magnificently infernal din, but strip it down and you can see the beautifully fashioned bareboned riffs at the heart of their music, even when picked out by duelling cellos. Classic rock indeed. A couple of more obvious pieces follow, essentially paying tribute to cinema soundtrack maestro, Hans Zimmer. Even for anyone who hasn’t seen the movie, ‘Mombasa’ and ‘Time’, both lifted from ‘Inception’, create those sensory sensations that stir the soul.

An object lesson in how to sequence tracks on an album follows, with a blasting cover of Avici’s ‘Wake Me Up’ and a rousing version of McCartney’s ‘Live And Let Die’ bookending a second sympathetic “re-imagining’ of a Michael Jackson song. This time it’s the lesser known, but commercially successful (and very controversial) ‘They Don’t Care About Us’. Songs with lyrics done without lyrics would apparently lack the obvious. By teasing out the nuances, and even when they are holding the fury in check, like on the Bond theme’s explosive middle eight, 2 Cellos add enough weight to these measured performances to make the words seem redundant.

The Deluxe version of the release adds a DVD to the CD. This truly is great value, as it is composed of seven videos, including promos for ‘Smooth Criminal’, ‘The Trooper Overture’ and two expansive, adventurous, live tracks from their European tour. This may not be rock as we know it, but as thrilling contemporary sounds go, this’ll do just fine. 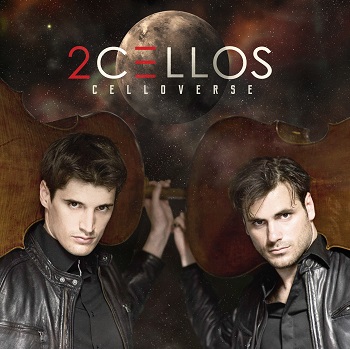